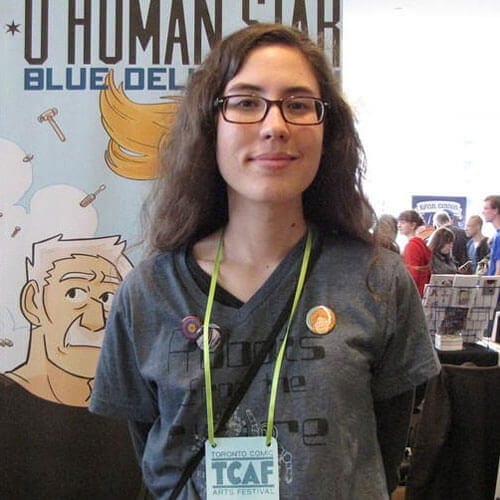 This article was written by one of our Teen Correspondents and was originally published on VOX Atlanta Teen Communications. Thanks to Turner Voices and the Arby’s Foundation, we’re able to collaborate with VOX Teen Communications to share the perspectives of the next generation of arts writers with our city’s cultural community.

Blue Delliquanti is an illustrator perhaps most famous for her comic O Human Star. Her work has pushed the boundaries of comics, sharing the LGBTQ experience in her writing, and offering deep societal questions through her plots. She has gone on to be published in major anthologies and received an Ignatz award nomination. Delliquanti is currently at work on another graphic novel, Meal, which delves into the curious world of a chef incorporating insects into the cuisine. Delliquanti will be in conversation with bug breeder Chelsea Thomas at Manuel’s Tavern on March 23 at 7 p.m. to discuss the book, bugs and Atlanta Science Festival’s Project Residency with AIR Serenbe, which brought the project into being. I had a chance to talk to Delliquanti about not only her works but her experiences as an artist in general.

ArtsATL: How did you get into comics and when did you decide you wanted it to be your career? 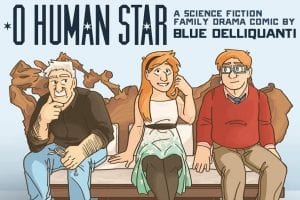 Blue Delliquanti: I had been interested in making comics since middle school. It was one of those things where I didn’t really see a viable path to having it be a real job until college. By that point, things like online comics started becoming more visible and I felt like I could probably draw one of those. Over the next couple of years there were fundraising tools like Kickstarter and Patreon that helped me to start making comics. These things helped create an audience over time so I guess I started making comics at the best time possible to make a living out of them.

ArtsATL: You’ve developed a loyal fanbase that a lot of writers and artists would dream of. How did you do that?

Delliquanti: I think it came about organically. It was a matter of me putting out pages on a regular basis. Because my story comes out of an LGBT perspective and is about LGBT characters, people from the LGBT community tend to be very loyal because they are super hungry for work that treats them with respect and features characters like them. If they see someone who has an interesting story to tell, I feel they want to support that creator anyway the can. This can go for a lot of different things too. It’s a matter of figuring out the people that would read what you would like to write and meeting them halfway.

ArtsATL: When did you decide you wanted to highlight the LGBT experience in your comics?

Delliquanti: That sort of came about when I was wrapping up college because that was a time I started coming out myself, and that was due in part to getting the idea for O Human Star. Getting the idea comes first, and I realized it was touching on themes that I did not know much about. As I worked on the idea and grew more, and read more works on LGBT people, that helped me understand my own personal information. So it kind of went alongside personal stuff, so in that way it came about organically as well.

Delliquanti: For Meal, that reflects a very real interest that I have, which is the subject of eating insects, which is something I learned about a few years back, and I thought it was pretty cool. I kept getting drawn to articles or books or stories about it. The fact that I was interested in this cuisine that wasn’t getting a lot of coverage made me want to tell it in a way that I really enjoyed. So it ended up being this “New Girl,” “I want to be the best” story. But it is also an homage to a genre of comics I find very entertaining.

ArtsATL: What motivates you to keep writing and illustrating?

Delliquanti: The story in particular, I feel very strongly about and want to see to completion. The good thing is that O Human Star and Meal are two different types of comics so if I’m not motivated by one, I can work on the other. But there is something to be said about a schedule and getting the work done when you need to and taking breaks. And also giving yourself different kinds of things to draw or different exercises. Painting, for example, helps me feel refreshed when I have to work on that original project. A lot of other people knit, sculpt, make 3D models or other things to get their creativity back.

ArtsATL: What advice do you have for burgeoning artists or writers?

Delliquanti: Get your sources of inspiration from everything like movies, paintings and poems. And have a sense of discipline for your work and before you know it you’ll have a finished product that you’ll be proud to look at.