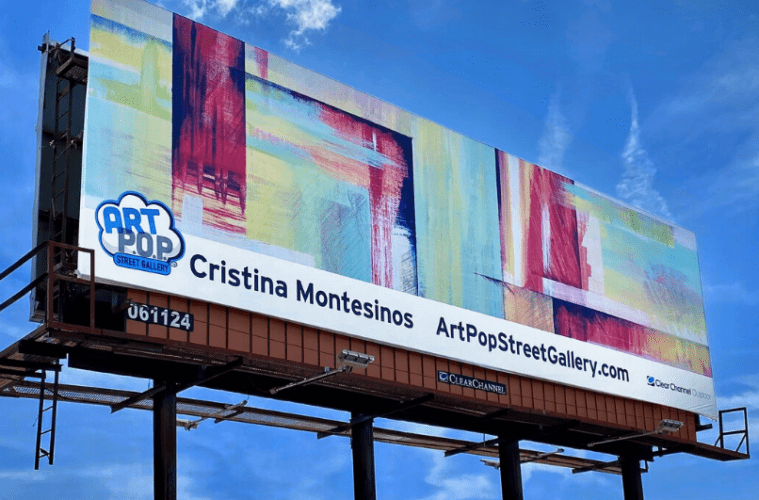 ArtPop Street Gallery has splashed its way onto metro Atlanta’s billboards. The nonprofit based in Charlotte, North Carolina, has made its debut here, sharing artwork by metro artists on large–scale spaces including bus shelters, Atlanta Hartsfield-Jackson International Airport, MARTA stations and along commuter routes.

“I had an obligation to serve the artists of our community and I had an epiphany — why not give billboard space to artists,” says Wendy Hickey, ArtPop’s executive director. She’s worked in outdoor advertising for more than 20 years and was on the Pocono Arts Council in Stroudsburg, Pennsylvania, in the early 2000s.

Since its beginning as a grassroots organization, ArtPop has featured 409 artists in 15 cities and 12 states. “Artists gain immediate confidence that comes after being juried into one of our pops,” Hickey says. “It gives them the confidence to pursue a career as a full-time artist.” For one year each artist receives a static and digital billboard along interstates and in the city center.

With help from supporters, ArtPop juried and selected the work of 30 metro artists across multiple mediums for its ATL ArtPop Street Gallery. Meet a few of those artists and where their billboards can be found (although ArtPop plans to rotate them on occasion through March 2021).

MARK ALBERHASKY, 67, picked up his first camera at age 18. After he retired from the world of medicine, photography took center stage. He’s traveled the world to shoot the inside of ice caves and chase the evening sunlight in Africa. Alberhasky, who lives in Sandy Springs, describes his style as “uncovering the essence of a moment and creating an interesting image that will stop the viewer in their tracks.” ArtPop chose an Alberhasky photo of a paddleboarder facing the sunset in the Florida Panhandle. It’s in Lilburn at 4455 Stone Mountain Highway. See more on his website.

CRISTINA MONTESINOS, 49, has worked as a graphic designer and art director. In recent years she’s leveraged her talent for composition to create abstract paintings on canvas. She uses a specific color palette and shapes influenced by nature. Her ArtPop piece, The Beauty of the Fall (2019), was inspired by a backyard walk. “I happened to see these red, yellow and orange leaves on the grass and as I looked at the color palette, I thought I need to do something with this.” She moved to the metro area in 1993 and lives in Decatur. Her billboard is in Marietta, at the end of the Ed Voyles Collision Center parking lot, 2360 Windy Hill Road S.E. See more on her website.

LIZ STUBBS, 51, has always told stories with her photographs. Her earliest memories include the magic of a Polaroid camera and the ability of instant film to capture a moment. After moving to Atlanta in 1995 for a film career, she realized her love for portrait photography. She lives in Kirkwood. “What I adore is the ability to see how amazing [people] are, what lights them up and to see their spirit.” Stubbs’ billboard is titled Unbound and depicts a woman wading in a pool. It’s at 152 Centennial Olympic Park Drive N.W. See more on her website. 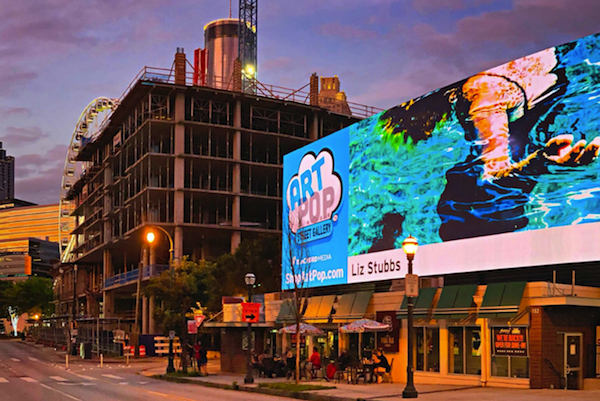 MICHAEL WALL, 30, left the security of friends and family in South Carolina in 2015 to become a working artist in Atlanta. Earlier this year a friend urged him to apply to the ArtPop Street Gallery. “I remember drawing stick figures in kindergarten with crayons,” he says. “Now I have my own personal billboard. I am truly humbled.” His ArtPop billboard features an oil painting of his wife and muse, Danielle. His digital billboard is downtown at 152 Centennial Olympic Park Drive N.W. He has a static billboard that’s viewable from I–20 East/West near Pryor Street downtown. See more on his website.

This is the best part! We love seeing artists meet their billboards and seeing their artwork larger than life! Check out Michael Wall of ohthasmike.com in front of this STELLAR digital display, The Atlanta Sign! Have your spotted the #ArtPopATL billboards cropping up all throughout the city yet? 👀Thanks Mark Alberhasky for the video! www.imagema.com#theatlantasign #atl #atlanta #atlantabillboards #localart #artoftheday #artonbillboards #artpopstreetgallery #portraitpainting

SHARANDA WILBURN’S billboard flashes back to the expressive colors of Andy Warhol (1928–1987) and his pop–art screen prints. Wilburn, 36 and a native Atlantan, has painted such leaders as Atlanta Mayor Keisha Lance Bottoms, politician and activist Stacey Abrams and singer Adele. It’s Adele’s eyes that shine in Technicolor on her billboard, formerly found downtown at 152 Centennial Olympic Park Drive N.W. See more on her website. 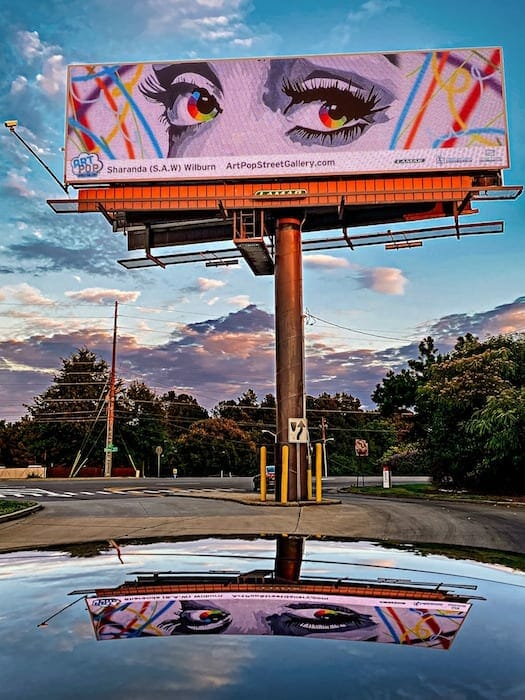 HAVE YOU SEEN IT? We don’t have an address for this billboard.

To see the work of all 30 metro artists, go HERE.