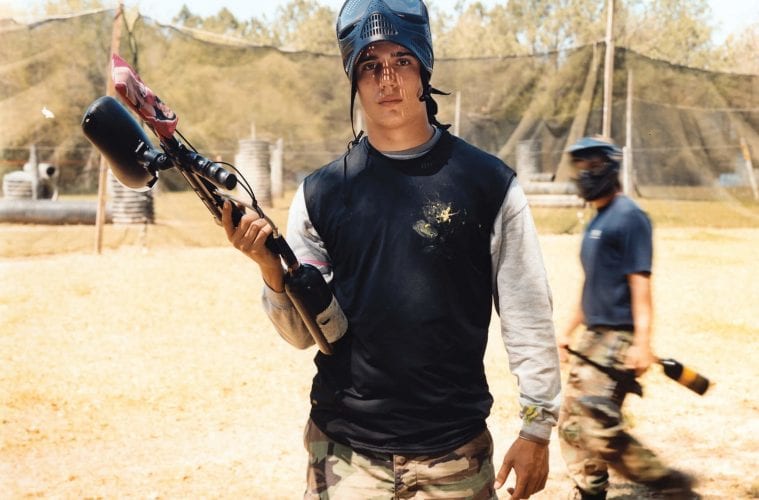 Review: Photographers turn the lens on youth culture in “The Future of America” at the Hudgens Center

Stand-up comic Hari Kondabolu titled his 2014 comedy album Waiting for 2042 in reference to the year when census data projects that white people will become a minority in the United States. Or as the character Ilana — perhaps less concerned with specifics — says in an episode from the first season of the Comedy Central show Broad City: “We’re headed toward an age where everybody’s gonna be, like, caramel and queer.”

With an eye toward projected demographic trends such as these, the group exhibition The Future of America at the Hudgens Center for the Arts through April 28, brings together work by seven lens-based artists documenting various communities and subcultures among American teenagers and children: black cowboys and cowgirls, boys wearing fatigues and armed with paint guns, adolescent girls in their bedrooms. Curated by Rebecca Dimling Cochran, an Atlanta-based curator and critic who also manages the private art collection of home builder and philanthropist John Wieland, The Future of America suggests that considering younger generations’ habits and self-conceptions will offer insight into the cultural changes America anticipates in coming decades. Though this sort of photographer-as-anthropologist approach possesses certain merits, its timeliness is mitigated when much of the work on view by over half of the photographers involved is nearly (or over) ten years old. (For me, the first giveaway in Lauren Greenfield’s 2008 video Kids + Money was the appearance of child actor Matthew Underwood, who played a character who shared my first name on the popular children’s network Nickelodeon beginning in 2005). This is not to say that documentary photography from 2008 and 2009 doesn’t shed light on contemporary and, possibly, future American culture. It is, however, ironic and somehow anachronistic to find yourself looking at several photos from a decade ago in an exhibition called The Future of America, especially if you were — like me and these photos’ subjects — a teenager at the time they were taken.

Rania Matar, Raissa, Medford, Massachusetts, 2009, archival pigment print, from the series A Girl and Her Room.

Compelling portraits require individual idiosyncrasies that generational labels like “millennial” risk obliterating through broad strokes. The most engaging figures in the exhibition are those whose personalities are surprising and funny, like the kid with a stuffed rat covering the muzzle of his paintball gun in Ruth Dusseault’s photograph Rat Boy or the irresistibly charming toddler Saida Ahmed posing atop a chair in her portrait by Bryan Meltz. A girl named Raissa, appearing sprawled elegantly across her crumpled duvet, stands out from the rest of the figures in Rania Matar’s series A Girl and Her Room because of the wry indifference of her gaze. The exhibition’s suburban location also becomes part of the viewing experience, if only because of the time spent in traffic for some viewers to visit in person. Immediately off the I-85 exit ramp nearest to the Hudgens Center, giant letters spell “JESUS” across a billboard, a striking contrast to the Islamic clothing worn by the Ahmed family in Meltz’s portraits of a Somali family. At the time the photographs were taken, the Ahmed family lived in Clarkston, Georgia, only a half-hour or so away from Duluth by car. Of these two suburban Atlanta cities, Clarkston is undoubtedly more representative of what data suggests the future of America will be; in fact, its demographics have already shown a white minority for nearly 20 years. Challenging viewers to consider our country’s future is important, but this exhibition more urgently attempts to redirect their attention to the people who are most vulnerable in its troubled present.