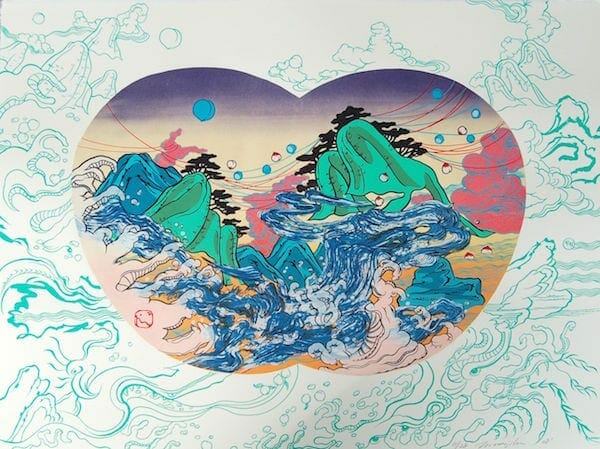 This piece is by painter, printmaker and sculptural ceramist Jiha Moon, one of more than 25 artists taking part in "PROJECT."

The Temporary Art Center opens PROJECT on Friday in what used to be the Conklin Metal Building in southwest Atlanta. The 66,000-square-foot space features work from more than 25 well-known, Atlanta-connected artists, including Paul Stephen Benjamin, Lonnie Holley, Kojo Griffin, Sonya Yong James, Michi Meko, Jiha Moon and Fahamu Pecou. $15 requested for opening-night reception (or volunteer and get in for free). The show and space will close when the building is demolished in late December. There’s no heat, so dress for the weather.

Downstairs, a Hitchcockian thriller in its second weekend at Actor’s Express, follows a sad-sack, beyond-their-prime brother and sister and her husband. The piece crackles, as does the work of Atlanta actors William S. Murphey, Mary Lynn Owen and Travis Smith. Through December 1. (Our review HERE.)

Celebrated Atlanta photographer Lucinda Bunnen this weekend opens From Nuns to Now at the design showroom Switch Modern in West Midtown. Bunnen has chosen 30 career-spanning photos that hold meaning for her. Tonight’s reception is by invitation only, but the show is free and continues through January 31. It’s one of several special events the showroom is holding in conjunction with its own Design Icons of the 20th Century exhibit.