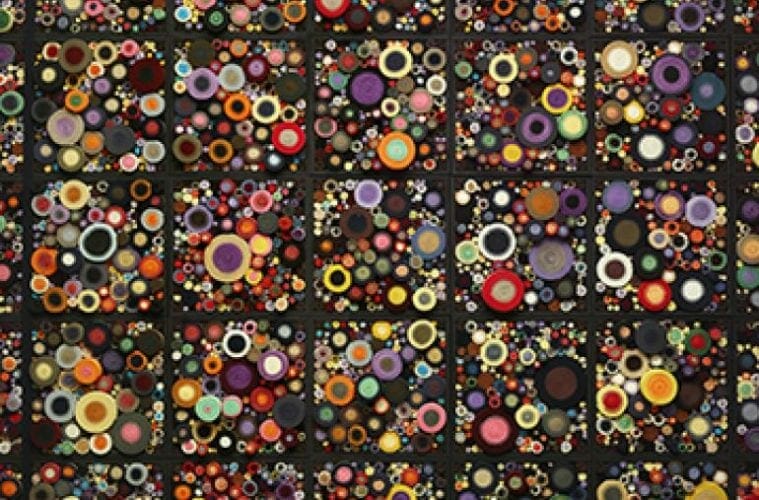 A detail from Steven and William Ladd's Scroll Space, part of the High Museum's 2020 Speechless exhibition (Photo by Matt Checkowski)

The High Museum of Art will join forces with the Dallas Museum of Art for a 2019–20 exhibition titled Speechless, which will explore the myriad ways we use our senses to connect to the world. The multisensory, interactive and immersive experience is intended for visitors of all backgrounds and abilities. It opens in November in Texas museum and in April 2020 at the High.

The show will debut new work by six leading or emerging international designers and design teams — Ini Archibong, Matt Checkowski, Misha Kahn, Steven and William Ladd, Laurie Haycock Makela and Yuri Suzuki. Their site-specific installations and new commissions will create participatory environments in which senses merge or substitute for one another. Among its components are the following: The fellowship gives the artists a major stipend to create new work, a solo exhibition of the new work, an exhibition catalog and paid studio apprentices over the course of a year. Guest curator Wassan Al-Khudhairi of the Contemporary Art Museum in St. Louis selected the new fellows.

Ariel Dannielle, who has a B.F.A. from the University of West Georgia, was born and raised in Atlanta. She creates large-scale paintings that depict the daily experiences of young black women and says she’s been influenced by the work of Kerry James Marshall and Alice Neel. She focuses on developing personal narratives within her portraits that challenge gender and racial stereotypes. Her work has been seen in Atlanta at Agnes Scott College’s Dalton Gallery, the Goat Farm, MINT gallery, TILA Studios and ZuCot Gallery as well as at Trio Contemporary Art Gallery in Athens, Perez Museum Miami and the California African American Museum in Los Angeles.

Courtney McClellan, from Greensboro, North Carolina, now lives and has her studio in Atlanta. She earned a B.A. in studio art and journalism/mass communications from the University of North Carolina at Chapel Hill and has an M.F.A. from Tufts University and the School of the Museum of Fine Arts, Boston. She was a Fountainhead Fellow in the Sculpture and Extended Media Department at Virginia Commonwealth University (2013–14) and a sculpture fellow at the University of Georgia (2015–17). She’s been an artist in residence at the Hambidge Center in Raburn Gap, the Wassaic Project in New York and Yaddo in Saratoga Springs, New York. In 2020, Witness Lab, her new solo exhibition and performance project, will be exhibited at the University of Michigan Museum of Art. She is a visiting assistant professor of art in sculpture at UGA. William Downs‘ work can be seen through August 31 in Recent Drawings (with Krista Clark, Yanique Norman and Rocio Rodriguez) at Sandler Hudson Gallery, which represents him. The Greenville, South Carolina, native has a studio in southwest Atlanta, a B.F.A in painting and printmaking from the Atlanta College of Art and a multidisciplinary M.F.A from the Mount Royal School of Art at the Maryland Institute College of Art. In 2018, the national nonprofit Artadia named him an Atlanta awardee. He’s had solo and group shows at Sandler Hudson as well as at the Contemporary Art Museum in St. Louis, Grizzly Grizzly gallery in Philadelphia, and E.C. Lina and Parker Jones galleries in Los Angeles. His work has toured in two major exhibitions, Art AIDS America and Black Pulp!

The nonprofit Living Walls last week began a new event series titled “Start Talking. Stop HIV” and unveiled a Barry Lee mural to encourage conversation in Atlanta. The project, which continues through August, aims to reduce HIV infections by encouraging open and safe discussions. It continues July 15 with a “Health Policy & HIV Criminalization in the South” discussion (7–9 p.m. at the Phillip Rush Center Annex on DeKalb Avenue) and July 23 with an “HIV Advocacy & Protest Through Art” discussion (7–9 p.m. at Sister Louisa’s Church Annex on Edgewood Avenue). More events will be announced soon. The grant is named for Calle, who promoted art and culture and demonstrated her passion for it every day, all while trying to make Atlanta a better place to live. The grant is designed to honor her life, hard work and passion for the equality of all people and diverse cultural expression in public spaces. Calle, Living Walls’ programming director, died in November 2015 at age 26.