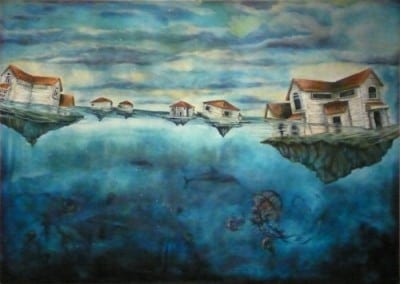 The end of days looks to be the beginning of a promising career for Stephanie Kolpy. Pick your poison. In some works, Kolpy envisions a parched and barren landscape. In others, she limns a world overcome by water or torn up by rampaging  cyclones.

A third group suggests a takeover by an unseen cosmic-size force, which clears away the detritus of civilization by dropping, say, a bus into the crater of a mountain-turned-wastebasket. Kolpy often represents these scenes as cutaways, like an ant farm in a terrarium.

Animals are few. Humans are gone, though the white clapboard houses that perch precariously near a chasm or float like a penguin on an ice floe in a vast blue sea could be stand-ins. The silverpoint drawings, which range from small details to large panoramic views, are the most memorable. Kolpy, who recently earned an MFA at Georgia State University, loosens a sure naturalism with a sometimes quavering line.

The effect feels like William Blake, simultaneously sophisticated and innocent, the product of an artist possessed by her imagination.