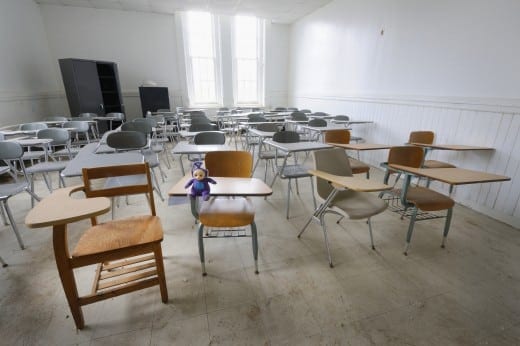 Morris Brown, the historically black college now a crumbling shell of its former self, is the subject of Without Regard to Sex, Race or Color, an exhibit of photos by Andrew Feiler at the Atlanta University Center Robert W. Woodruff Library through November 29.

The Atlanta artist spent a year photographing its ruins, from empty classrooms to deserted dormitories and a forlorn display of a case of athletic trophies left behind. The swimming pool in Diving Board – John H. Lewis Complex is dry, its bottom exposed for all to see. The photos — a sampling from his eponymous book, recently published by University of Georgia Press — are metaphorical as well as factual. Feiler sees the project as a commentary on the state of education.

“For the past 350 years the American dream has been built on education,” he says. “Historically black colleges started to evolve primarily in the decades following the Civil War, which helped transform educational opportunities for African-Americans. Then it was the GI Bill that transformed the South from relatively poor to prosperous.  And of course, Brown v. Board of Education.

“But today college access and affordability, and the crushing levels of student loan debt, are putting it at risk. And when you look at these images that are devoid of students, professors and activities, it leads back to that important narrative.”

Morris Brown, which lost its accreditation in 2002, was once a thriving institution. Founded in 1881 by freed enslaved people, the college was one of the few HBCUs that was not established by white philanthropists. Some of its alumni include activist Hosea Williams and Isaac Blythers, former president of Atlanta Gas Light Company. It is celebrated in Outkast’s Morris Brown, a funky ode to HBCU band culture and was one of the film locations for the 2002 coming-of-age flick, Drumline.

Photos provided by the Robert W. Woodruff Library Atlanta University Center Archives Research Center as part of the exhibition, show what used to be. In black-and-white prints from the 1970s and ’80s, the campus is alive with students in lectures, walking campus grounds and participating in various events. They render images such as Feiler’s Teletubbie, a classroom is empty except for a stuffed toy on a desk, all the more melancholic. But Feiler says this is not just a visual story of loss but of opportunity. “The themes of this work are that education matters… [and] that art matters,” he says.

“I am inviting people into the Morris Brown story, into the Atlanta University story and the HBCU story. But I [also want] to engage in this important societal debate of how do we provide educational access to those who want it.”

Feiler will speak at the AUC’s Woodruff Library at 10 a.m. on November 7, for an ACP event.

He will speak about his book Without Regard to Sex, Race, or Color: The Past, Present, and Future of One Historically Black College, at the MJCCA Book Festival on November 17.