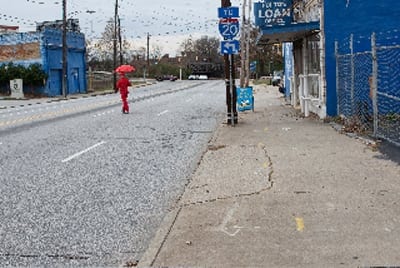 An “Aerge to Walk”: Three performances by Stuart Keeler this week

In a symbolic reclamation of Atlanta for pedestrians, Stuart Keeler will walk from Midtown to I-285 in each of three performances on December 16, 18 and 21. You are invited to join him.

Dressed in primary colors, armed with maps and his cell-phone GPS system, the Atlanta artist (and co-founder of Le Flash) will depart at 9 a.m. on the appointed days at the intersection of Peachtree Street and Ponce de Leon Avenue.

Keeler sees the project as a sort of kinetic meditation. “Aerge,” a term he got from Miami University professor Ben Jacks, denotes “meditational happenstance in walking or related efforts,” he says.”Jacks compared it to Robert Irwin’s ability to merge ideas into action, as a sculptural practice.” He will also make drawings based on his experience.

This is his first Atlanta performance since “Social Exchange” in 2008, when he set up a boutique in Gallery Stokes and invited people to bring articles of clothing and exchange them for someone else’s donation. The clothing was free; the real currency was the exchange between visitors and the connections they made.