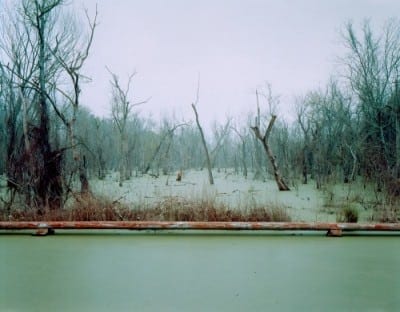 The Mississippi River takes on a ghastly beauty in Richard Misrach’s photograph “Swamp and Pipeline, Geismar, Louisiana,” the artist’s testimony against the industries that have poisoned the waters and the people who live and work nearby. The photograph — from the “Cancer Alley” series the High Museum of Art commissioned as part of its project “Picturing the South” — is on view in “Altered Environments: Contemporary Landscapes from the Collection.”

Curatorial assistant Danielle Avram chose an appropriately elastic theme to guide her prospecting in the storerooms for this mini-exhibit. Also included, for example, is a series of 16 photos William Christenberry took of the same Alabama shack over the course of 34 years. A coat of paint. A change of proprietor. An addition. Not all that much happens, considering the amount of time that passes, but then change comes as slow as molasses in poor rural areas such as the artist’s beloved Hale County.

Alterations are like nested Russian dolls in Abelardo Morell’s eerie photo “Grand Tetons, Jackson Hole.” He turns a hotel room into a giant pinhole camera (#1), through which he brings the  iconic Western landscape indoors (#2), where it is projected upside down (#3) and looking more like a doily (#4) than a rugged mountain range.

“Altered Environments”  is one of several vest-pocket displays of the permanent collection scattered throughout the museum. Two highlight new acquisitions –works on paper by contemporary South African artists and contemporary crafts. The latter is judiciously broad-ranging, contrasting, for instance, the luxurious materials and meticulous craftsmanship of Atlantan Jon Riis’ beaded tapestry “Insect Icon” with the humility and deliberate inelegance of  Toshiko Takaezu’s earthy (no pun intended) ceramic vessels.

And there is a group of old friends: sculptures from the bequest of Lenore and Burton Gold. Marc di Suvero’s welded-steel “Twisted Navel” and Nancy Graves’ polychromed iron, steel and bronze “Rope Pull” agree on  the idea of sculpture as line and negative space, but they part ways in execution. In contrast to the heroic industrial aesthetic di Suvero represents, Graves’ whimsical piece embraces decorative flourishes, figurative references and, if I may court political incorrectness, a certain feminine grace.

Barry Flanagan, a British sculptor who died in September, similarly rebelled against the prevailing ethos in the late 1970s when he began creating works like the 1982 “Anvil (No Belt).” An anthropomorphized bronze hare, his signature figure, strikes a pugilist’s pose. So much for the high seriousness of Minimalism; back we go to tales of Br’er Rabbit and their bemused commentary on the human condition.

You know how it is when you paint a wall at home and suddenly the rest of the room looks dingy? Seeing these works from the permanent collection reminded me that the contemporary art galleries could do with some refreshing themselves. Hopefully, new curator Michael Rooks will have an opportunity to rethink the presentation once he gets his feet wet.