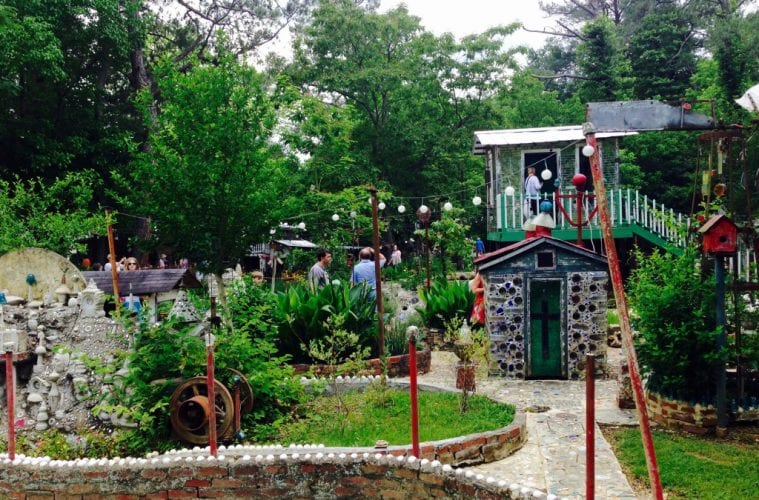 Alongside “Outliers,” the High offers a new look at Howard Finster’s Paradise Garden

The best road trips allow us to slow down, stay open to the possibility of surprise and take time to see what we typically overlook. The High Museum’s curator of folk and self-taught art, Katherine Jentleson, says she hopes the High Museum’s upcoming Road Trip to Paradise Garden on July 14 will help participants do all of that and more.

Organized in conjunction with the High’s new exhibition Outliers and American Vanguard Art, the road trip is designed to shed new light on Georgia’s most famous outlier artist, Howard Finster, and the elaborate folk-art environment he built around his home in Summerville. “The more you understand the Garden, the more you understand the man,” says Jentleson. “Every aspect of what he did was intertwined.”

The day will begin with Jentleson leading participants on a guided tour through the nine chronologically sequenced galleries of Outliers at the High, containing 250 works by nearly 90 artists including Thornton Dial, Lonnie Holley, Nellie Mae Rowe, Ronald Lockett and Howard Finster. The show offers a fresh look at artists who have been variously classified as folk, primitive, visionary, naïve, outsider, self-taught or isolate, artists who practiced on the margins of the established art world and whose contributions to modernism have often been disregarded or overlooked. Howard Finster, Untitled (The Angel of the Lord), 1989 (Courtesy High Museum of Art)

Once guests have been steeped in Outliers for about an hour, they’ll board a bus and travel about 90 minutes northwest of Atlanta to Summerville, the home of Howard Finster’s Paradise Garden, where Tina Cox, executive director of the garden, will welcome the group and cohost the outing.

“We look to artists like Finster and those featured in Outliers because they transform the world in a really significant way through their work,” says Jentleson. “You can like or not like the aesthetic, but after seeing their expression in a fully realized way, seeing the complexity of materials used, how abstract ideas are translated into form, and the significant social messages that inform much of their work, you have to acknowledge that it’s serious.” Born in 1915, Finster was a lay preacher who supplemented his income by working in a textile mill and repairing bicycles. Although he was initially frustrated by the lack of impact his sermons had on congregants, everything changed for Finster in 1976 when he claimed a dab of paint on his finger took on the appearance of a human face and commanded him to make sacred art. He interpreted the vision as a sign from God and set about creating visionary art and a sacred environment around his home.

Within a decade, he was working around the clock to create what would become Paradise Garden. He built amateur irrigation systems, constructed massive architecture from humble materials and painted on everything from canvas and wood panels to briefcases, hats and bicycles. He constructed sidewalks and molded sculptures and repurposed broken plates, shattered glass and figurines to create mosaic walls in the tradition of Italian grottos. By 1982, an NEA grant helped him formalize his depiction of heaven in the shape of a five-story tall World’s Folk Art Church atop a preexisting chapel. (The agency recently earmarked $55K for the restoration and conservation of the structure.)

R.E.M. filmed their music video Radio Free Europe at Paradise Garden in 1982, also featuring his artwork on the cover of their 1984 album Reckoning, and Finster designed the Talking Heads’ Little Creatures album cover in 1985. He famously chatted with Johnny Carson on the Tonight Show in 1983, charming television audiences by commandeering the conversation and playing his banjo. By the time he died in 2001, Finster had produced more than 47,000 works, some of which are part of the High’s permanent collection today, and cemented his critical and popular acclaim.

The growing understanding of self-taught artists represents an important democratization of culture and a new awareness of who actually lives in the United States, Jentleson says. As cultural gatekeepers like the Metropolitan Museum of Art (where History Refused to Die, the first exhibition dedicated to Southern African American self-taught artists in the museum’s history, is currently on view), the National Gallery of Art (which organized Outliers and American Vanguard Art) and the High confer credibility on the genre, the art form has enabled inclusion, and galvanized others in the mainstream art world to embrace difference and diversity across race, class, age and gender.

“I think self-taught art is immensely important to where we are globally,” says Jentleson. “There is a trend across academic and cultural institutions toward redefining our canons, from literature to visual arts to politics. There’s a big move towards trying to see what we’ve missed and the ways in which our culture can better reflect who we are. That means a much more pluralistic definition of culture and contributions. Excellence can be achieved through alternative pathways. You don’t have to go through a singular pipeline.”

Nor, she adds, do locals have to travel far to experience great adventures.

“The South has all these fundamentally incredible places which may or may not align with our personal worldview, but they represent really unique visions and offer a greater understanding of the cultural forces that have shaped our region,” she says. “If you live in Atlanta and you’ve never been to Paradise Garden, a place that people from all around the world come to, it’s like taking for granted one of the greatest cultural resources of the region. The anticipation over Yayoi Kusama’s Infinity Mirrors this fall is fantastic, but how many people know that Howard made his own infinity room, a house of mirrors, on stilts? The extent to which we get excited over Kusama’s work to transport us out of our daily experience of the world is great. But let’s not overlook the fact that the same opportunities exists right in our own backyard.”