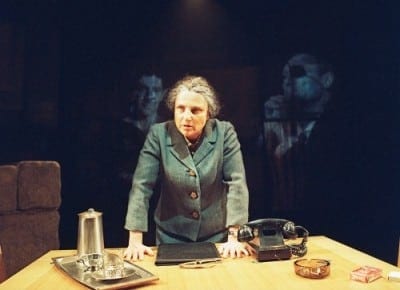 Review: History of a nation spun as personal yarn in “Golda’s Balcony”

“I’m at the end of my stories,” Golda Meir says at the very beginning of “Golda’s Balcony.” But of course she is not, and for 90 minutes the stories pour forth: funny, moving, personal, historical. As channeled by actress Tovah Feldshuh, who owns the Golda Meir franchise as thoroughly as Yul Brynner owned the King of Siam, she is a colossus — if intentionally dowdy, with prosthetic nose, plain clothes and one leg wrapped in support hose a little bulkier than the other, reflecting Meir’s phlebitis.

Playing at the Alliance Theatre through October 30 — click here for tickets — “Golda’s Balcony” is a rich retelling of history that seems both long ago and almost contemporary. Meir was prime minister of Israel from 1969 to 1974, and the play begins with the aged Meir looking back on the events of the 1973 Yom Kippur War, when Israel came very close to defeat. She recounts the tense telephone calls with Washington, trying to cajole American help, even as she paints her famous Israeli political allies with sharp observance and wit. (The one-eyed Moshe Dayan was quite a well-traveled lover. “I always wondered,” she muses, “did he take the eye patch off?”)

In the program notes, Feldshuh says that Meir herself chose William Gibson, author of “The Miracle Worker,” to write the play about her life. Gibson spent six months with her in 1977, which gives the play a density and attention to detail that is very rewarding. Feldshuh originated the role on Broadway, where it ran for nearly 500 performances, making it the longest-running one-woman play in Broadway history. She has performed it around the country since.

From the framing device of the Yom Kippur War, she skips backward through the stages of her life, much like someone of a certain age reminiscing with more regard for a good yarn than a good chronology. Born in Kiev, Ukraine, and raised in Milwaukee, she was a headstrong girl who ran away from home as a teenager to live with her older sister. There she met quiet Morris Meyerson, who wanted to marry her. Already a Zionist firebrand, she agreed only if they could live in Palestine, in 1921, on ground that 27 years later would become the nation of Israel, thanks in part to the unrelenting vision and work of people like herself.

As she recounts her youth, the stooping and limping figure transforms into youth, giddy with being in love with Morris and even more in love with working toward the founding of Israel. In 1948, with Israel under attack from its neighbors, Prime Minister David Ben-Gurion sent her to the United States to raise money for defense. She gave an amazing speech to the Council of Jewish Federations, telling it, “You cannot decide whether we will fight. You can only decide whether we will live or die.” It’s a line as rousing as any that Winston Churchill ever delivered, and Ben-Gurion later said, “Someday when history will be written, it will be said that there was a Jewish woman who got the money which made the state possible.” “Golda’s Balcony” is that history.