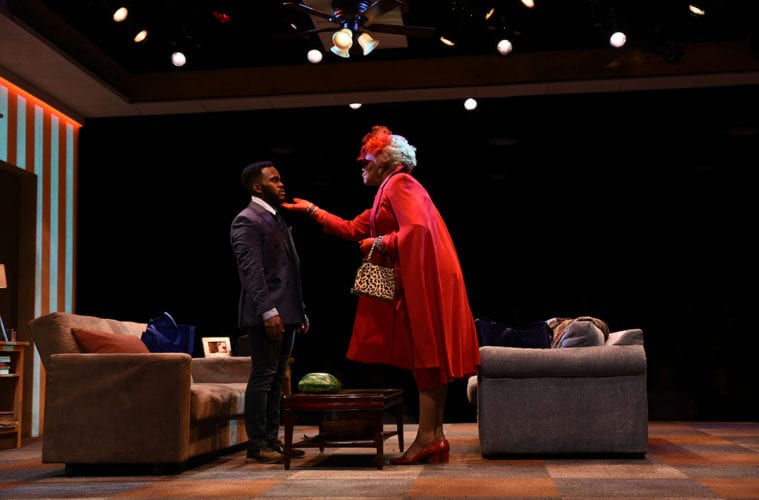 Travis Turner and Andrea Frye star in the 2018 Kendeda play Goodnight, Tyler at the Alliance. (Photo by Greg Mooney)

Sitting in Manhattan Theatre Club’s Broadway house watching Tarell Alvin McCraney’s Choir Boy, it occurred to me that a show like this has never been on Broadway and may very well never come again. I first experienced this moving piece of theater about young black boys coming of age at an all-boys prep school at the Alliance Theatre four years ago. McCraney, whose play In Moonlight Black Boys Look Blue was adapted into the Academy Award-winning film Moonlight, first developed a relationship with the Alliance while he was a student at Yale. His earlier play In the Red and Brown Water, which is a part of his popular Brother/Sister Plays trilogy, won the Alliance Theatre’s Kendeda Graduate Playwriting Competition in 2007, leading to regional theater productions across the country.

The Kendeda Competition is celebrating its 15th anniversary this year, and McCraney is just one of the program’s many success stories. Eleanor Burgess won in 2015 for her play Start Down, and her drama The Niceties just received a successful Off-Broadway run at Manhattan Theatre Club. Jireh Breon Holder, whose civil rights-era play Too Heavy for Your Pocket won the 2017 award, is now a writer on the NBC medical drama New Amsterdam. Mike Lew won in 2012 for his play Bike America, and three years later, the Alliance produced his play Tiger Style! on their main stage.

“What’s so great about the Alliance is that they’ve been quietly going on producing work that they believe in and continuing to produce those playwrights,” says Lew. “By giving [playwrights] that early backing and keeping up with them, we’re all just following our impulses by being backed by an artistic home. I’m extremely optimistic about the health of playwriting in a way that I haven’t been in a while. There’s so much good work happening that it’s hard to keep up with it.”

The competition started in 2004 and is open to students in playwriting MFA programs across the country. Every year, one winner is chosen to receive a cash prize and a full production on the Alliance Theatre’s Hertz Stage, and four finalists receive professional readings of their plays. As the story goes, after 9/11, many cultural organizations in Atlanta were struggling. People were hesitant to gather in large crowds, the economy was sinking and the country was at war. This is when longtime arts supporter and financial advisor Barry Berlin approached Diana Blank, founder of the Kendeda Fund, about creating a program to strengthen the arts in Atlanta. They invited a number of arts organizations in the city to submit a big idea that they would execute if money were no object. The Alliance Theatre’s artistic director Susan Booth said that she would create a program to produce world premieres by early-career playwrights, and the rest is history. 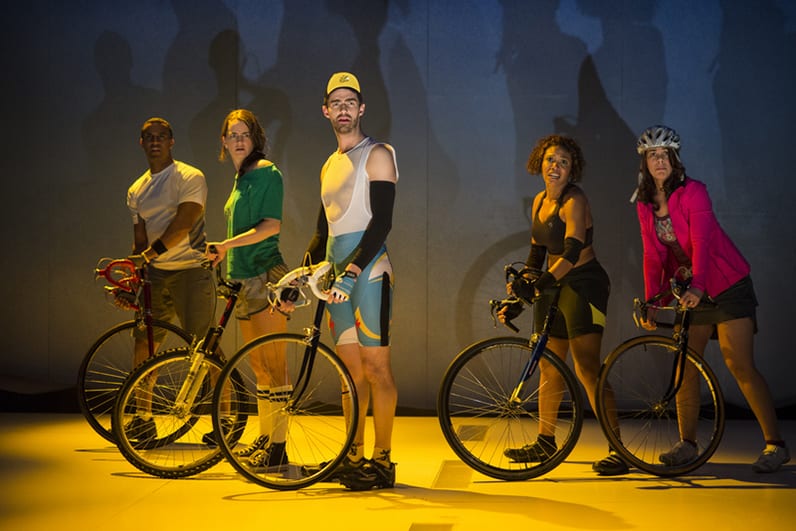 Today, Berlin continues to support the program as an advisor to the Kendeda Fund. He says his favorite to date is the 2010 winner, Carapace by David Mitchell Robinson, which is about a recovering alcoholic struggling to reconnect with his 20-something-year-old daughter on her birthday. Berlin added that it has been rewarding to have such a significant impact on so many careers.

“In theater, survival is a measure of success, and in many ways, evolution tells us that,” says Berlin. “When the program turned 10 years old, we had as many of the past winners and finalists as we could muster back in Atlanta for a reunion. Almost all of the finalists are still working in their craft, which is pretty remarkable.”

For 13 years, Celise Kalke, the Alliance’s former director of new projects, shepherded the competition and the winners. Kalke ensured that the competition was playwright-centric and prepared the students to know how they should be treated in a professional setting. She also served as dramaturg on many of the plays to make sure they were ready for the stage and for publication.

“This competition prepares writers for new experiences — making the transition from graduate school to professional life smoother,” says Kalke. “Because it does that, they can do anything.     . . . The competition became a pipeline for writers and theaters to find each other here in Atlanta and across the country.” 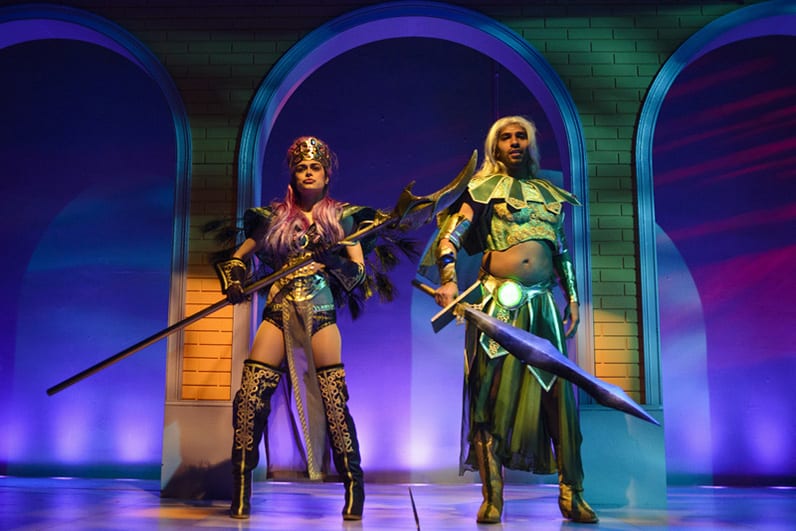 More than launching playwrights into success as writers for the stage and the screen, the Kendeda Competition has also changed the types of stories audiences see in theaters across the country. Seven of the past winners are women, most of the finalists are women and 10 past winners are people of color.

Madhuri Shekar won in 2013 for her play In Love and Warcraft about a girl named Evie who tries to apply her gaming strategy to matters of the heart. However, when she falls for a boy in real life, all of that changes. Since winning the competition, Shekar has been commissioned by the Alliance to write a play for young adults, Antigone, presented by the girls of St. Catherine’s, and her other plays have received productions across the country. She recently recorded her first audio play, Evil Eye, which will be released on Audible this year.

“It’s a blind submission process, and I remember when I won for In Love and Warcraft, they didn’t think a girl from India wrote that play,” Shekar recalls. “[The competition] removes a bunch of assumptions. Plus, the Alliance has trained its audience to love the Kendeda slot. They know that even if they don’t like it, they’ll be happy that they came because they come with a sense of adventure. It gets rid of that excuse that audiences are not interested in new plays.”

This year’s winner, Goodnight, Tyler by B.J. Tindal, is about a 26-year-old African American man who is killed by a police officer. Throughout the play, Tyler’s friends and family members – all of whom think they knew him best — reflect on his life while he observes from the afterlife. The show runs through March 10, and Booth says that the play’s timeliness is part of what made the theater select it as the winner.

“There’s an audacity in taking on a subject as rife as police violence and doing so with humor and so many open doors and windows for an audience to walk through,” says Booth.

For Tindal, who earned his MFA in playwriting from Northwestern University, winning the Kendeda is the culmination of a lot of hard work by a lot of people. He started writing the script as an undergraduate at Oberlin College. He recalls that the night Darren Wilson was not indicted for shooting Michael Brown in Ferguson, Missouri, the “campus exploded at Oberlin College.” He says his white friends didn’t understand, and his black friends were outraged.

“I wanted to think about the fact that we have hashtags but no access to who the person really is,” says Tindal, who is a Philadelphia native. “We don’t know their favorite flavor of ice cream, their pet peeves or their favorite childhood memory. Those are the things that humanize people. I really wanted to write a story about a person who lost their life to police brutality who wanted to be remembered as more than the victim of a shooting.”

Tindal and his dramaturg have produced workshop productions in Ohio and Chicago, but this will be the first full-scale production. He says that the play is not only about the grief that Tyler’s friends and family share but also about Tyler coming to peace with dying even though he hadn’t fulfilled all of his dreams.

“The biggest thing I’ve learned throughout this process is to trust my instincts because there are a lot of people talking about a lot of different aspects of the play, from marketing to casting,” says Tindal. “When you’re walking into this as a 25-year-old, it can be kind of intimidating. I said to Celise that I felt like I was trying to impress the professor, but now I’m my own professor. I’ve learned to default to my gut instead of to the person in the room who’s been there the longest.”

One thing is for sure: Tindal is now part of an elite group of writers who are bringing new stories to American audiences in new ways. Time will tell whether there will be another success to the level of Tarell Alvin McCraney — the odds are likely.

“There’s a generation of truly exciting theatrical voices that attribute their professional launch to this competition, and that’s hugely gratifying,” says Booth. “We pride ourselves as being a cultural exporter, and these writers are a big part of that identity.”