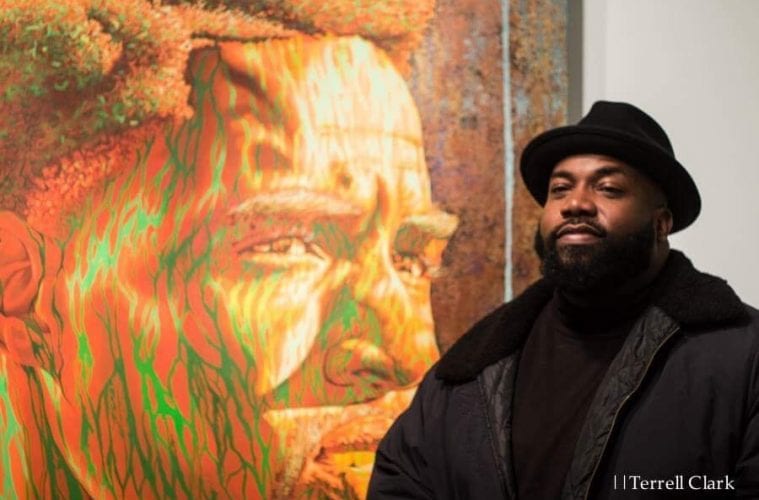 Atlanta is a city where the dollar stretches far, but “when you ain’t got no money,” as visual artist Alfred Conteh would say, you can’t eat where you want to eat, shop where you want to shop or go to the school where you want to go to school. The living conditions fabricated by materialism and consumerism are depicted through Conteh’s paintings that render slices of life and portraits that define this moment in time by people’s dress, tattoos and hairstyles. This moment in time is one where Atlanta is severely divided into two worlds — those with and those without. Conteh feels inclined to tell virtuous narratives of marginalized people in Atlanta through paintings and drawings with his current exhibition, Two Fronts: Surface and Reason, currently on view at September Gray Gallery through March 3. Amid the 50 largest U.S. cities, Atlanta ranks number one for its income disparity between the wealthiest and the poorest, which is more than twice the national average. So while the city’s affluent appear on television shows like The Real Housewives of Atlanta, Don’t Be Tardy, Rickey Smiley for Real, and Love and Hip Hop, spending their wealth, taking a drive a few miles up Peachtree Street, you’ll find families struggling with life below the poverty line and in homes that are not suitable for subsistence. As alcoves around the city become gentrified, a middle class is burgeoning that seemed to be shrinking just a few years ago. For each new shopping center, condominium complex and living space that materializes, the price of living increases and longtime residents of neighborhoods all around Atlanta suddenly can’t afford to remain inside the perimeter. Alfred Conteh is using his talent to bring awareness to this community of people. This exhibit is an illustration of people who endure the living conditions that many of us only read about or think of in theory. He wants to put faces to the condition and allow these people to exist as more than just statistics.

At the age of three, Conteh drew pictures of race cars soaring over buildings in the encyclopedia in his parents’ home. Although they tried to convince him not to “deface” their valuable collection of books, they’ve saved them. And now Conteh has evidence of his early years as an artist. When an art teacher showed him a photograph that expresses nonverbal communication, Conteh took notice that art is more than pretty pictures, but a way to convey a message. With all of his work, the sculpture he’s most known for and the new series of paintings and drawings, his message is constant. He wants to engage in conversation about Black economic empowerment. Two Fronts: Surface and Reason, his first solo show in Atlanta, does just that.

I stopped by Conteh’s studio to talk about his ideologies. Amidst scores of paint bottles and canvases, we sat on his homelike leather couch to talk. The orderliness of the space impressed upon me a greater interest in the man who reflects these sensibilities onto his artwork. For the most part, Conteh’s style of painting is pristine, clean and orderly. He even makes note that while you can say they’re pretty, the subject matter he’s dealing with is far from pretty. Conteh doesn’t bite his tongue when explaining why he’s choosing Black economic empowerment as the subject matter for his artwork. “Most of the things that we need to deal with as a people goes back to that one main issue: money,” he says.

Unlike the battles the Black community was fighting 50 years ago during the Civil Rights Movement, Black people today are not only fighting for civil liberties but for a stake in this country’s economy. Roland Martin of NewsOne Now reported that it takes the Jewish community 19 days and the Asian community 28 days before their dollar leaves their respective communities. The Black dollar leaves the community in a mere six hours. In an effort to explain his stance on economic empowerment among Black people, Conteh gets up from the couch to show me a painting he’s sending off to a gallery in New York, one he calls 7 am. Conteh admits that he was quick to indict those who stood in line outside a sneaker store on a cold December morning to buy the newest pair of Jordan’s, but he also confesses he’s no better because he has to pay someone outside his community for everything he needs to live as well. “Well when it comes to that perspective, thematically for the last few years my work has been about Black empowerment and specifically Black economic empowerment,” he says. One might be curious about finding out what portraits of people and paintings of scenes from Atlanta life have to do with economic empowerment, but Conteh contends, “I wanted people to see the faces of those who are marginalized. For you to look into their eyes. When it came to those portraits I think they were very telling of the people who live here. The whole series is about people who live in Atlanta. It’s not just the expression.” And their expressions tell you so much about their place here.

In this body of work, Conteh wanted to put faces in front of the statistics that speak of their marginalization in Atlanta. He didn’t ask his subjects to come to his studio or pose them in any way. Instead, he opted to approach people candidly and ask to take their photograph, allowing his subjects to pose however they were most comfortable. In some instances, he captured them without their knowledge and later asked for permission. “I made it a point to be mindful of how they’re posed and what they’re communicating with their facial expressions,” he says. In some of the portraits you can look into the eyes of the subject, but many of them look away, not allowing their souls to be exposed through their eyes. Conteh further manipulates their images with paint for an almost camouflage effect.

Conteh forges a connection between his earlier work with sculpture and his latest work with paintings and drawings by employing a patination technique that distresses the subjects. This technique does lend to an understanding of the theme of economic despair. Similar to how steel becomes distressed to natural elements over time, so, too, do people undergoing unnatural treatment like denial of the resources they need to live. Conteh’s skill in rendering the features of his subjects leaves one in awe of their realism. Not only are the subjects featured depicted with life-like rendering, the way he captures their expressions allows you to feel as if you know the people or that you’ve seen them somewhere before. They become familiar, and that’s his goal.