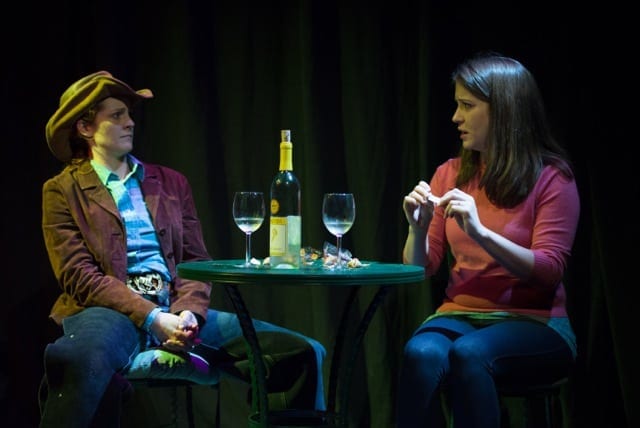 Review: A Pittsburgh couple meets a woman who likes horses in evocative “Late: A Cowboy Song”

What if there were no such thing as being late for anything? If our relationship to time and responsibility were such that we always felt we were right where we should be? Living each moment in the present moment? That’s the intriguing and attractive outlook of the character Red (Christen C. Orr) in renowned playwright Sarah Ruhl’s early work Late: A Cowboy Song. Red lives on the fringes of industrial Pittsburgh, a horse whisperer who works in various stables just outside the city limits. The 2003 play is getting a production at Actor’s Express with the Weird Sisters Theatre Project, running through August 8.

Red lives a campfire-under-the-stars, cowboyish lifestyle that seems both fantastically otherworldly and tantalizingly within reach to Mary (Kelly Criss), Red’s former classmate who has ended up on a far more ordinary and regimented path, the female half of a struggling, middle-class couple. Being late for Mary — whether that “late” is late arriving home to her partner after spending the day riding with Red or late with her period — has serious and weighty consequences.

Ruhl creates a deliciously dreamy, half-real atmosphere for the pretty straightforward situation: the dramatic scenes are punctuated by Red’s high-lonesome cowboy songs on acoustic guitar (that probably sounds like it would be awful, but I think Orr manages to make it appealing: the song interludes are simultaneously charming, homespun and unreal).

Mary is in some tough spots (it’s one of the reasons Red’s life is so attractive), and all of this Criss conveys well. She’s at her best and brings the role most vividly to life in a brief scene in which the character speaks directly to the audience. We wonder about Red though: the character seemed such a perfect fulfillment of Mary’s unacknowledged desires that I spent much of the play thinking that she must be some figment of Mary’s imagination.

I liked Jacob York as Mary’s nebbishy, perpetually beleagured partner Crick. He’s too artistic to hold down a job (he’s fired from his position as a museum guard for sneaking touches of his favorite painting), but he has no artistic ambitions or aspirations and no money to support an aesthete’s lifestyle. He’s the contemporary version of E. M. Forster’s Leonard Bast, a character-type that things will just never turn out well for.

Our most basic questions about Red are never really answered or even addressed. We understand what Mary sees in Red, but Red’s interest in Mary is never broached. Red is naturally friendly and enjoys good company, sure, but is this also a seduction? Mary’s life seems fraught with worries, and her plank-to-plank journey from the perils of domestic family life to an oasis of self-adequacy combine to make Red seem larger than life. The play nearly floats into cliche dramatic territory: the heterosexual couple’s semistable, if mundane, home life threatened by the noncomformist crypto-gay (I think it’s actually a genre).

The central couple seems too generic, which they were supposed to be, I guess, but even the more liberated character seems like she is “interesting” in a generically theatrical way. What Ruhl does best is create a dreamy atmosphere. She understands that even the most prosaic things — a Pittsburgh couple encountering a woman who likes horses — can take on all the monumental, resonating aspects of myth and dream when represented on stage.