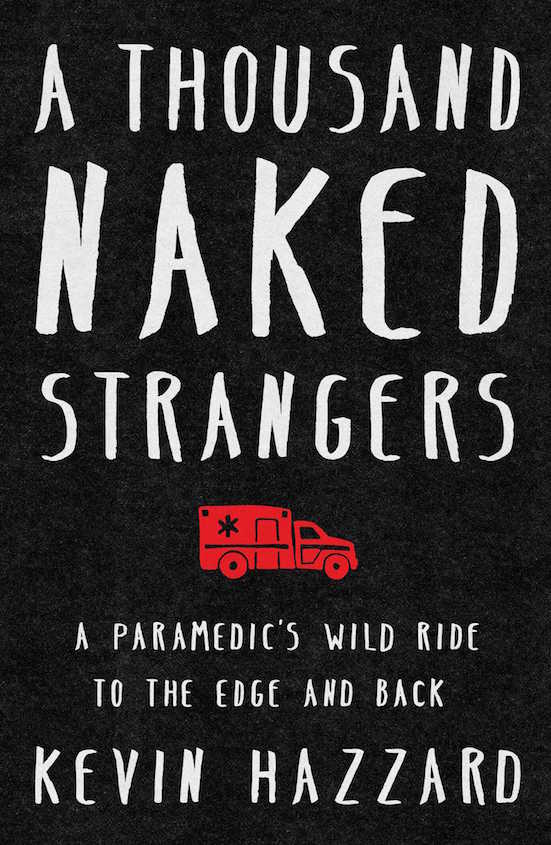 We don’t often align ambulances and all that happens inside them with humor, but Kevin Hazzard’s memoir, A Thousand Naked Strangers (Simon & Schuster) does just that. Expanded from Hazzard’s blog of the same name, this memoir’s account of life as a Grady hospital paramedic is as funny as it is revelatory.

Hazzard will be talking about his memoir book on Tuesday, January 12 at 7 p.m. at the Margaret Mitchell House.

Hazzard’s career as a paramedic started in the early 2000s. After moving from South Carolina with his wife, Sabrina, to Atlanta, he worked as a reporter. One day, while investigating a tunnel collapse in Cobb County, he was struck by the heroism of the paramedics tending the victims of the disaster.

His mother was a nurse, but the idea to go into medicine didn’t occur to him until the tunnel collapse. At the time, he recalls being vaguely unhappy with his reporting job and contemplating his childhood desire to do something “adventurous.” The 9/11 attacks had also just happened. As a graduate of The Citadel, he could have easily followed his college buddies to Iraq after the Twin Towers went down, but did not feel that this was the path for him. “I saw my friends going to war,” he tells ArtsATL, “and I was inspired by that, but it wasn’t for me. I respected the fact that there was a service element to what they were doing and that they were putting themselves in difficult situations and being tested.”

In an epiphanic moment, the threads of these disparate thoughts — a desire for career change, a tradition of medicine in his family, an interest in a service-oriented, adventurous job — braided together as he watched the paramedics help their patients. He remembers a “weird feeling of understanding that this was what I wanted to do.” Weeks later he was sitting in class to become an EMT (emergency medical technician), learning about intubation and how to set broken bones.

After a short stint driving for an ambulance company that specialized in tending and transporting Medicare patients at nursing homes, a position became available at Grady Hospital.

Grady Hospital is a monolith, both physically (who hasn’t driven in its shadow on the I-85/75 “Grady” curve?) and because of the volume of medical need that it handles. From victims of gunshot wounds to car wreck trauma, Grady can provide medical attention for the most severe cases, but many of these patients encounter Grady medics before they even get to the hospital. And this is where Hazzard came in.

Driving the ambulance for 12-hour shifts through some of the most struggling neighborhoods in inner-city Atlanta brought Hazzard face-to-face with the most disturbing, disgusting, poignant and heart-wrenching drama the human condition could serve.

A woman who is knifed in the breast by her boyfriend is followed by a call that requires Hazzard to remove Darryl, love-sick and desperate for his girlfriend to choose him over another man, from the wall where he has nail-gunned himself. Darryl never wants the love of his life to leave him. If he’s a permanent fixture of her house, he figures he may have a chance of staying with her.

Despite the disturbing nature of the scenes in this book, Hazzard’s atmospheric writing and instinct for the comical creates an entertaining read. Desensitizing tragedy with a dose of humor is as old as storytelling, but Hazzard’s use of comedy is particularly important here. The direct writing style that Hazzard laces with satire balances the weight of his subject, allowing the reader to delve into the darkness with him.

In the case of Darryl and his girlfriend Tammy, Hazzard sets the scene with direct statements that buffer the intensity of Darryl’s decision and the emotional impact to the reader. After Hazzard and his partner find Darryl attached to the wall and witness a terrible interaction between the two former lovers, (Tammy tells Darryl that if he stays on the wall, he’s going to have to watch her “consummate a new life” with her new boyfriend.) Hazzard blandly states:

“As engrossing as all this is, there’s only one option: Fire up the saw and cut him out. Darryl overhears us talking and starts shaking his head, his voice trembling. ‘No sir, no way in hell. You can’t cut this wall. This wall cannot be cut. This wall is like the bond of love and there ain’t nothin’ can cut through the bond of love!’ Twenty minutes later, the fire department has cut through the wall.”

Darryl’s dramatic devotion to Tammy is near-Shakespearean in its self-sacrifice and fervor. The fact that Tammy misses the point and Darryl is still talking about the “unbreakable bond of love” while attached to her wall is tragically touching. Hazzard’s presentation of the scene is sensitive to both of the lovers. He allows them to speak for themselves while remaining attuned to the comedy underlying this desperate moment. Structurally, the short, declarative sentence after Darryl’s outcry to tell us that the fire department cut the wall, prompts relief and a smile. Darryl will be freed. The tension is over. We can now laugh about Darryl’s devotion knowing full well that he will be saved.

The memoir overflows with stories told in this pattern. In this way, his exploration of these unsettling moments becomes a keyhole into an aspect of human experience. We are able to face the full weight of human tragedy but find humorous respite at the close of the scene.

In addition to exploring a sampling of human troubles, writing the memoir also gave Hazzard an opportunity to process his own experience of being a paramedic for nine years. After retiring from Grady, he started writing again. (He now lives in Los Angeles with his family and writes full time.) As he gathered blog posts together to create a larger, linear story, he found himself “digging into something that probably would have been ignored and forgotten.”

Ultimately, Hazzard discovers that being a paramedic is often more wild than the average person would expect. The desire to be a hero becomes secondary. For Hazzard, it was an attraction to the “freedom that comes from disaster,” the ability to function and provide help in a situation where the normal has slipped. Hazzard was attracted to the extreme level of concentration and pulse of adrenaline required to save lives. After nearly a decade, and two children, he decided he no longer needed this energy in his life. One can hardly blame him.

Ambulances are common things, as easily forgotten as they are noticed in the first place. But A Thousand Naked Strangers requires us to sit up and pay attention. As a result, the next time an ambulance passes, it will be impossible not to reflect on the chaotic scene it contains.