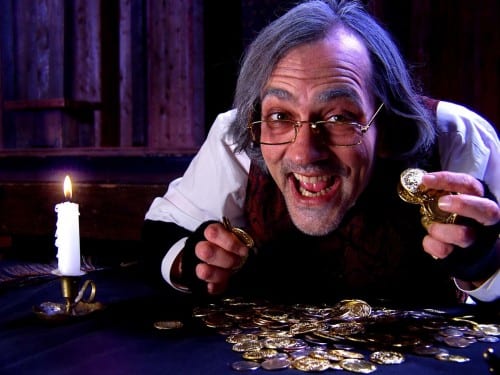 “A Christmas Carol” is “A Christmas Carol,” right? Well, not exactly. You might think you’ve seen all there is to see of Charles Dickens’ yuletide classic, but three returning Atlanta theater productions prove the old adage that there’s more than one side to every story.

This much is certain: Ebenezer Scrooge will retire on Christmas Eve a miserly curmudgeon and awake the next morning a kindly benefactor, transformed by visits from a trio of ghosts. In addition to its uplifting message about holiday spirit and faith in humanity, what keeps audiences coming back to “A Christmas Carol” is as much the journey as the destination.

The Alliance Theatre production (currently in previews, opening December 1 and running through December 24) tells the story on a grand scale, with a cast of dozens, along with spectacular sets, costumes and special effects. In Aurora Theatre’s small studio space, it’s done as an intimate one-man show (December 1-18). Pitched somewhere in between is the New American Shakespeare Tavern’s take on the tale (December 1-23).

Indeed, each of the three actors who play Scrooge — Drew Reeves at the Tavern, Anthony Rodriguez at Aurora and Chris Kayser at the Alliance — portrays the well-known character with his own singular interpretation of the role.

Chris Kayser as Scrooge in the Alliance Theatre’s production of “A Christmas Carol.”

This year marks the Alliance’s 22nd annual staging of former Associate Artistic Director David Bell’s adaptation of “A Christmas Carol.” But Kayser’s association with the Dickens material dates back even further, to the start of his local theatrical career some 30 years ago at the long-gone Academy Theatre. Now making his 19th appearance as the Alliance’s Scrooge, Kayser says the role still challenges him.

“Repetition can be the death of creativity, so I never want to let myself think that I’ve got [the character] down to a science,” Kayser says. “I’d like to think I’m a better actor this year than I was last year, a better actor last year than I was the year before that, which hopefully brings an added depth to the performance every time I do it.”

By the same token, he says, “I don’t approach it with any particular plan to mix things up. I always want to be open to the possibility of trying different things, of course, but a lot of that comes naturally, depending on the other actors I’m working with from year to year, and what sort of individual energy each of them brings to the room.”

This time around, for instance, fellow “Carol” regular David de Vries portrays Jacob Marley. And while Kayser has an established rapport with Elizabeth Wells Berkes, who was cast in previous versions as his thwarted fiancée, Belle, this year she’s playing the Ghost of Christmas Past instead. Among other familiar faces in the ensemble, again under the direction of Rosemary Newcott, are Neal A. Ghant (as Bob Cratchit), Bart Hansard (as the Ghost of Christmas Present) and Daniel Thomas May (as Scrooge’s nephew Fred).

Anthony Rodriguez is the ensemble in Aurora’s fifth annual production, portraying not only Scrooge but 18 other characters as well. “The beauty of it and what keeps it fresh for me as an actor is the personal storytelling approach we take with the show,” he says.

“No two shows, no two audiences are ever quite the same. Yes, I have a general sense of the blocking, but because I’m surrounded by people on three sides of the stage, I can never predict which part of the audience might provoke the most direct interaction.”

At the Shakespeare Tavern, Drew Reeves has played Scrooge for eight of the past nine years, most of them alongside a core group of actors, including Matt Felten, Paul Hester, Andrew Houchins, Rivka Levin and Becky Cormier-Finch.

Drew Reeves gets miserly in the Shakespeare Tavern’s production of Dickens’ classic story.

“For me, whatever changes I’ve made in the role are probably more internal,” Reeves says. “The older I get, the more life experience I have, the more strongly I’ve started to feel an honest emotional connection to the character and his story.”

That emotional connection is “what has always resonated with audiences and what makes ‘A Christmas Carol’ such an enduring classic,” observes Tony Brown, who adapted and directs both the Tavern and Aurora shows. “On an elemental level, who among us doesn’t long to see Scrooge redeem himself, to make right things he messed up in his life? It’s a powerful story that transcends any specific time, place or culture.”

It’s also fun, Brown adds. “On a more surface level, it’s just highly entertaining, too; all about spreading good cheer and embracing the real meaning of Christmas.” To that end, both the Alliance and Tavern productions incorporate a festive amount of traditional Christmas music.

Local theater audiences can’t seem to get enough of Scrooge’s story, and that’s OK by the actors who play him. “I never get tired of playing it, because it remains such a powerful and hopeful story worth telling,” Kayser says.

Reeves agrees. “Seeing ‘A Christmas Carol’ has become an annual tradition for so many people, and it’s important to keep those traditions alive,” he says. Or, as Rodriguez puts it, “The idea that we can all live a better life, that it’s never too late to do some good in the world, that’s an idea that always bears repeating.”

There’s no “bah, humbug” about it