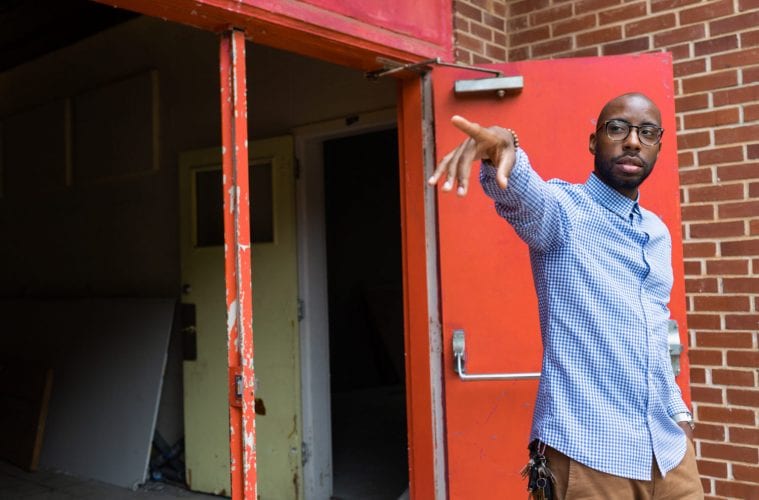 The 35th-anniversary year of Atlanta’s ArtsXchange marks some big changes for the organization.

The original Arts Exchange, which began in the early 1980s, provided affordable studios to artists and hosted exhibitions, performances and events in a former school building on Kalb Street in the Glenwood Park neighborhood near Grant Park. But as new development in the area encroached, the organization decided to sell that space in 2015.

After a several-year hiatus, the institution is welcoming new leadership, with Floyd Hall as managing director and Ivan Davis as operations director. The organization plans to revive in a new location in a former school building currently under renovation on Newnan Street in Atlanta’s East Point neighborhood, slated to open in stages in the fall of 2018. The organization is also officially changing its name from Arts Exchange to ArtsXchange. The first major upcoming event will be an awards ceremony honoring artists and community activists on September 22 at South Atlanta’s Chosewood Arts Complex.

ArtsATL visited with Hall and Davis to get a sneak peek at the new building in development and to chat about the organization’s past, present and future. Exclusive photos are by ArtsATL contributor Karley Sullivan.

ArtsATL: Let’s start with the nitty gritty. What will the new ArtsXchange feature?

Ivan Davis: In terms of square footage, we are a little above 20,000 sq. feet, with about 13 private studio spaces for artists. We also hold about four — possibly five — public spaces that range from theaters to dance studios, co-working spaces and meeting rooms. In terms of the private studios, the building will accommodate about 13 artists. When it comes to the public spaces, one of our co-working spaces can hold 60 individuals, and the other can hold six. ArtsATL: What are your hopes and goals for the new building?

Floyd Hall: We are at a very interesting, pivotal point with the organization and the building. Our vision for the organization relates to three things: culture, capacity and community. We want to support the community in East Point and the Greater Atlanta area, and we want to support the culture that comes with it. In terms of capacity: we see ourselves as a facility, so it’s important for us to support culture as it pertains to advancing artists’ careers, providing them with space to hold workshops and productions, as well as have their own private studios. In terms of community, we are creating a connection between those artists and the community. We want to make sure that we can provide a platform for artists to impact as many people as possible. ArtsATL: How do you plan to connect the community with the artists?

Hall: We do that in a very localized sense. We are in East Point, so we look from that starting point outwards to figure out ways to engage that community, members of the Atlanta area and beyond. That comes in the form of programming, of being a facility that has spaces that can be rented out for events, of providing studio spaces for individual artists. When we think about the radius of what our community looks like, that may take different forms, but I think everything from our facility being a space for events to housing actual professional work allows us to connect with the community. ArtsATL: What was the role of the old institution on the Atlanta arts scene, and how do you think its legacy will move forward with the two of you at the helm?

Hall: We made an innovative decision about the leadership of the organization. Alice Lovelace [former executive director of Arts Exchange] is still on board. She has moved into the role of chief officer. With myself as managing director and Ivan Davis as operations director, the two of us are heading more of the day-to-day functions and overall vision of ArtsXchange. Although the two of us may be the individuals that people come in contact with more often, Alice is still very much present. I think the previous version of the ArtsXchange will still be present in the DNA of the organization going forward. As an organization, it used to provide the same things we are now providing — a place for artists, culture, compassion and community. I think for us, as individuals, the biggest shift is answering the questions of what the organization will look like in 2018 and 2020. How will we update the formula that we’ve already been working with for the next generation of artists? A lot of what we will look like going forward is being put in place right now. ArtsATL: What are some of the challenges the institution has to face at the moment?

Hall: With any organization as it grows, especially if it’s in a period of transition, one challenge is finding out how, when and where you resell. Now, the challenge is establishing ourselves in the hearts and minds of the Atlanta community. We’ve been gone for a little while, and we’re looking forward to ramping up a lot of our communications to reintroduce ourselves to those who may not know who we are. As we settle in into a new location and a new city, we will be trying to cultivate a new, updated identity. I think that managing that change is going to be our biggest challenge. ArtsATL: What did you learn from former director Alice Lovelace? What are some of the skills she is passing on to the two of you?

Davis: She was one of the founding members of Arts Exchange. Her perspectives provide us with a lot of wisdom. Every day teaches us a lot of the organization’s values and how our team can help the community. For that, we are extremely grateful. ArtsATL: How do you plan to reconcile the past of the institution with its present and future?

Davis: The great thing about ArtsXchange is that it’s filled with artists. When you’re dealing with artists, you’re always dealing with people who are open-minded. Some artists can be very particular about things, but they are also very open to change. We’ll hold focus groups; we’ll have private events. We’ve also been in talks with the previous tenants of the building and those who’ve been affiliated with our organization previously as board members. We’ve always been in conversation with them to get a better scope and a better vision to where the institution has been and where it can go. In regards to Floyd and I, although we weren’t really involved with the organization for many years, it serves the organization well provided that we’re not very ingrained in the culture and history of it. It gives the organization the opportunity to start again with new eyes, with new energy and new visions for what can be possible for the future of ArtsXchange. Ultimately, I think that being in a space where arts are very open and integrated in a closely knit community lends a great opportunity for bridging the gap between past and future. ArtsATL: How do you foresee ArtsXchange altering the arts in Atlanta?

Hall: East Point borders the City of Atlanta – that means that we hope to still provide the same level of capacity and culture-building in the Atlanta area, but from a different location. That allows us to infuse some new artistic energy into that community and also hopefully foster more capacity for the artists that we’ve been in closer proximity to previously.