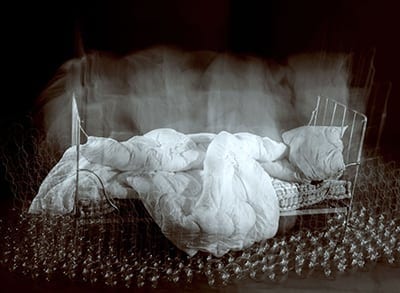 Review: Impressive art in CDC exhibit on violence against women

The most interesting exhibition of international contemporary art in town can be found in the Global Health Odyssey Museum at the U.S. Centers for Disease Control and Prevention.

Although one would not expect to see the likes of Wangechi Mutu, Louise Bourgeois and Mona Hatoum at the CDC (or, for that matter, together in any one place in Atlanta), “Violence, Women and Art” is well within its purview: this touring exhibition, organized by Artworks for Change, aims at arousing awareness of violence against women, certainly a worldwide scourge. 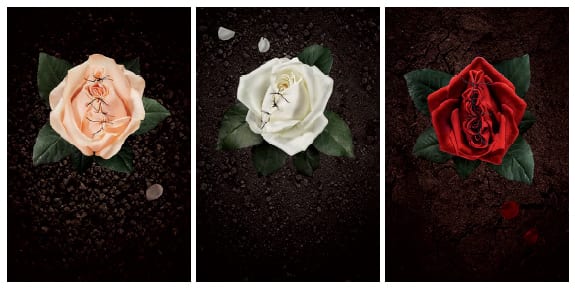 A message-oriented art exhibit is a tricky proposition, one that risks reducing the art to illustration of the message and/or failing to communicate to a general audience baffled or put off by contemporary practice. Curator Randy Jayne Rosenberg proceeds from a faith in the power of art but hedges her bets by selecting works diverse enough to allow various points of entry and by providing copious explanatory texts.

A poster designed by Swedish agency Volontaire (top photo), which was part of an awareness-building campaign about genital mutilation, anchors the accessible end of the spectrum. The designers built upon the sexual connotations of flowers (thank you, Georgia O’Keeffe) and poetic allusions to the bloom of youth in an image of three dewy roses, whose unfolding petals bear jagged stitches up their centers.

More often, the art, as art is wont to do, works on visceral or intuitive levels. Egyptian artist Amal Kenawy’s video animation “You Will Be Killed,” which alludes to violation in a hospital (supposedly a safe place), and Israeli artist Miri Nishri’s video “Esther Queen of the Swamp,” which puts the viewer in the position of a stalker, evoke feelings of terror, vulnerability and (Rosenberg hopes) empathy. 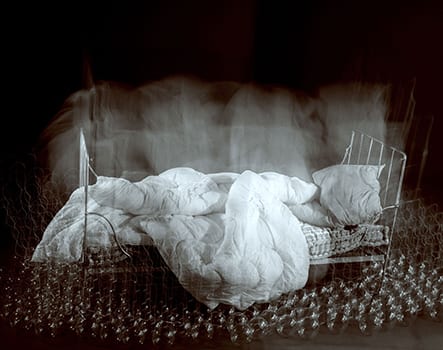 The raw, intimate drawings in Maimuna Feroz-Nana’s installation “No” communicate the rage of a Pakistani woman trapped in a society that subjugates her sex as a matter of course. She drapes a mannequin in a sumptuous white wedding veil flecked with red, which Rosenberg uses to suggest the connection between cultural attitudes and violence — here, the practice of bride burning. (Photo above from Gabriela Morawetz’s “Sleeping Self” series.)

At times, the didactics overwhelm or seem to have no connection to the art at hand. In other cases, the choice of particular works is puzzling. I still can’t figure out why Rosenberg included a video from Marina Abramovic’s “Baltic Erotic Epic,” unless — and I’m straining here — a bare-breasted woman pushing a skull into her sternum as if achieving climax is a symbol of empowerment. (Note: This video is on display not at the CDC but at the Museum of Contemporary Art of Georgia, in deference to school groups that frequent the CDC, according to the CDC museum’s curator, Louise Shaw.)

During my visit, a man took a quick look at a video of “Cut Piece,” Yoko Ono’s ritualistic 1965 performance (the above photo is from a 2003 re-enactment), rolled his eyes and walked away. Too bad: I thought the performance, in which participants take turns cutting clothes off her body, embodied (if I may use the word) what the show is about. Like most of the work here, it also stands alone. Message or no, good artwork offers its own rewards.

The exhibition will run through September 9. The public is welcome, but expect to show ID and step out of your car while it is inspected.