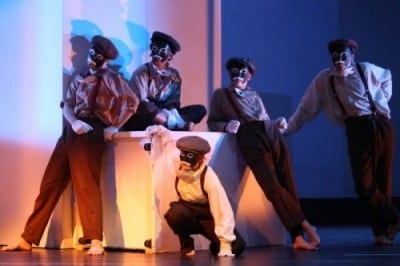 The play “All Blues,” at 7 Stages through October 9, takes a look at the 1948 investigative reporting of Ray Sprigle, in which the Pulitzer Prize-winning Pittsburgh journalist pretended to be black and wrote firsthand about the conditions of African-Americans living under Jim Crow laws in the South. He then published a 21-part series, “I Was a Negro in the South for 30 Days.” 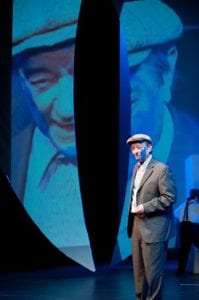 The play’s author, Robert Earl Price, gives this subject thoughtful consideration, but somehow “All Blues” comes up short in giving the story dramatic heft and resonance. It’s a co-production with Washington College in Maryland, where the play received its world premiere earlier this month.

“All Blues” dwells far too long on the metaphorical relationship of Sprigle’s project to blackface entertainment. The play is presided over by a chorus of actors in blackface masks, and the actor playing Sprigle, Del Hamilton, even dons black makeup and sings Al Jolson’s “Swanee.” Certainly Sprigle’s project bears some interesting similarities to that racist American theatrical tradition: the blurring of racial identity, the fascination with the other, the taking on of a black identity for the consumption of a white audience. But these are primarily surface similarities.

Sprigle’s project diverged from blackface entertainment in more significant ways than they paralleled each other. He was an alert and considerate agent of his project: sharply observant, angered by injustice, questioning of everything, aware of the complications of what he was doing. He did use language widely accepted at the time and now considered old-fashioned (“Negro household,” among other loaded terms), and shrewd references to blackface would have brought up interesting points within the context of his story. But overlaying such entertainment as a dominant theme is distracting and perhaps even unfair.

When the accomplished Hamilton, who is 7 Stages’ artistic director, simply intones Sprigle’s words, the play comes alive. But in Dale Daigle’s stage direction, such moments are often crushed by the use of blackface. At one point, Hamilton as Sprigle gives a moving account of how a multiracial family in the South kept the racism of the outside world hidden from the youngest children by spelling out the words “white,” “Negro” and so on. In the background, the chorus needlessly mimes the family at the dinner table performing this action: the cartoonish enactment detracts from, rather than conveys, Sprigle’s sense of anger and sadness at the unjust world that would eventually intrude. The chorus is also occasionally hard to hear: lines become indistinct when spoken together. 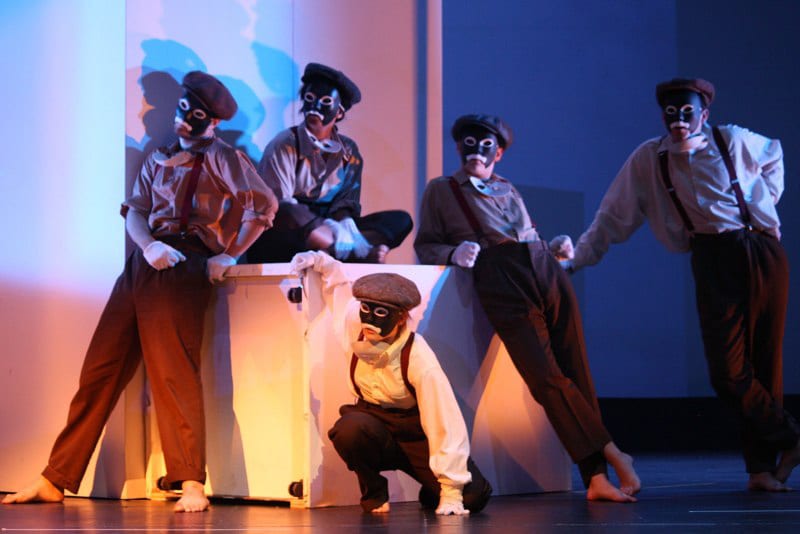 The chorus in Robert Earl Price's "All Blues."

The set consists of plain canvas flats in abstract forms onto which images and text are projected. This occasionally works well, as when vintage photographs and film of train stations and cotton fields are shown. Breaking the images up onto different surfaces gives them a surprising amount of depth and presence, and they seem enormous and fascinatingly detailed. But mostly the technique is frustrating, especially when headlines or other text are shown; the words became illegible when broken up by the different surfaces. The use of projected images of the live actors gives the audience the opportunity to see some up-close detail writ large but doesn’t add much to the drama, and some of the montages — as when images of Duke Ellington, the Alvin Ailey dancers and beaten slaves are all shown in rapid succession — are too disparate and too encompassing to create meaningful links to the dramatic action. Three central columns are moved around a lot, but without much effect or sense of purpose.

The abstract and deconstructed approach does yield some gems, as when Sprigle’s guide, John Wesley Dobbs (played by Michael Molina), rants poetically about the failed post-Civil War policy of giving former slaves 40 acres and a mule. But overall, the narrative feels too fractured by the deconstructive elements, and the blackface parallels loom too large for the story to come together as a cohesive drama.