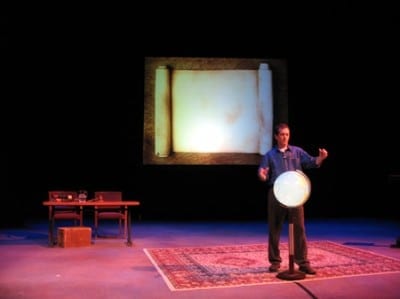 Georgia Shakespeare’s 25th season will begin with a world premiere: “Prophets,” a multimedia work by longtime company member Brad Sherrill, which delves into the Old Testament texts of Isaiah and Jeremiah. From March 24 through 28, Sherrill will perform “Prophets” in repertory with his first one-man Bible-based show, “The Gospel of John,” which he has performed more than 500 times since 2001 at churches and theaters, from off-Broadway’s Lamb’s Theatre to Westminster Cathedral.

I am sorry to say that I have never seen “Gospel,” but the YouTube clips (and this) are pretty wonderful. You can see how Sherrill’s grasp of Shakespearean rhythm transforms the words into liquid music.

As we reported earlier, Georgia Shakes has found the financing for Shake at the Lake, which will return to Piedmont Park on May 5-9. And its summer repertory will begin June 9 with “Shrew: The Musical.” It’s nice to see the Oglethorpe University-based theater programming new work and transforming itself from a summer festival to a year-round producer.