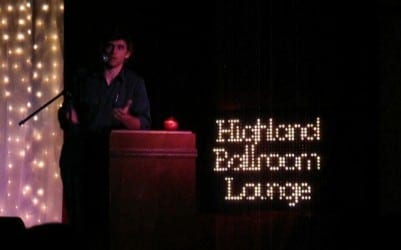 30 Under 30: Writer-impresario Scott Daughtridge got “lost in letters,” invites others to join him Once a month, words waltz around the Highland Ballroom Lounge, in the basement of the quaint Highland Inn. The audience starts to arrive around 8 p.m., descending stone steps that lead to a cozy bar with a mirrored backdrop. Then, Coronas and merlots in hand, they traipse into the ballroom. At 8:30 the lights dim, people settle into metal chairs arranged horseshoe fashion around a stage, and Scott Daughtridge, his slim frame clad in jeans and a blue-black shirt, takes to the microphone to welcome them to the “lostintheletters” reading series.

As the first author begins to read a poem about a cockroach, Daughtridge, who started the series 10 months ago, sits alert nearby, ready to assist with any problem that may arise. His gaze is intense and satisfied, then when the audience laughs and applauds at a line, he relaxes and sits back to enjoy the show. The 29-year-old literary impresario is also a writer. His stories have appeared in various print and online literary journals, such as Matchbook, The Broken Plate, Curbside Splendor and Storychord, and he is working on a collection of short stories and a novel.

Growing up in suburban Acworth, surrounded by Lakes Acworth and Allatoona, Daughtridge experienced what might appear to have been an idyllic childhood, playing soccer, riding bicycles in the neighborhood and reading books. But, he says, “I always felt like I didn’t fit into the ‘normal’ scheme of things. . . . The plan they set out for you is school, then job, then family.” He misbehaved in school and was drawn, like many teenagers, to novels such as Kate Chopin’s The Awakening and J.D. Salinger’s The Catcher in the Rye, whose protagonists chafe against conventional expectations — “characters who actually spoke out for what they wanted and were able to make decisions for themselves,” he says.

Although he had been writing since he was eight years old – stories, poetry, a journal — he never considered it a career path. The classic books he grew up on intimidated him, and he couldn’t imagine saying anything that would inspire anyone. At Center College in Danville, Kentucky, he majored in psychology and earned a master’s degree in social work. He did publish a story in the college literary magazine.

But, like the fictional characters he admired, he didn’t follow the established plan. Instead of finding a job in social work, he worked odd jobs on farms and in restaurants in Kentucky for two years after graduation. A favorite haunt was sQecial Media, an independent bookstore in Lexington, where he came across The Outlaw Bible of American Literature, published by Grove Press in 2005. Its array of nontraditional voices and writing styles, by the likes of Iceberg Slim, Snoop Dog and Annie Sprinkle, liberated him, Daughtridge says. He realized that powerful and meaningful writing did not have to restrict itself to a traditional style and that perhaps his lack of formal training should not prevent him from trying to write fiction.

Moving to New York on a whim in 2010, he immersed himself in literature. After his day job teaching college prep courses, he read widely, discussed books and writers avidly, attended readings and maintained a strict writing schedule, a practice he calls “getting lost in the letters.” And he published his first short story, “Rachel and Ruphus,” in Storychord in February 2012. Set in contemporary New York during a span of just a few hours, it’s a fascinating exploration of the bonds created by unexpected circumstances, as Rachel, a self-absorbed young woman, dog-sits Ruphus, an aging German shepherd. Written in a taut, unsentimental style, it culminates in a shocking and moving ending as Daughtridge channels his own experience of country versus city life to tell a story of life’s vagaries and, often, insignificance.

Not long afterward, Daughtridge’s longing for the Southern landscape won out over the excitement of the New York writing scene. He moved to Atlanta in May 2012. Quickly establishing himself in the arts community, he found work writing for BurnAway, Vouched Books and other publications.

“What impressed me most about Scott from the get-go was his aesthetic and enthusiasm,” says Laura Relyea, editor and “vicereine” of Vouched Books. She admires his authentic voice and audaciousness. “A lot of young writers shy away from the hard stuff, or at the very least sugarcoat it,” she says, “but Scott isn’t sheepish in addressing harder subjects: animal cruelty, drug use, death. His writing is direct and succinct, a very cutting combination. I’m excited to see how his writing evolves.”

Daughtridge says his approach to writing has been particularly influenced by underground rappers such as Aesop Rock, Atmosphere, Illogic, El-P and Aceyalone, because he admires their intelligence, artistic integrity and rejection of commercialism.

But he wasn’t content to concentrate solely on his own writing. Seeking ways to contribute to the community, Daughtridge decided to start a reading series. Through Relyea he met Chelsea Raflo, events director at the Highland Inn, who told him that the ballroom was looking to host quiet cultural events. Five months after arriving in Atlanta, he launched “lostintheletters.”

Modeled on his favorite New York reading series, at KGB Bar, the program is low-key and casual. Authors have free rein to read anything from book excerpts to diary entries to grocery lists. Participants have included such writers as George Singleton, Steve Gillis, Josh Russell, Anis Shivani and Lydia Ship. Daughtridge’s proud parents are often in the audience.

Daughtridge sees his future as “consumed by literature and the passion for reading and writing.” In other words, he found his path by getting lost in the letters.