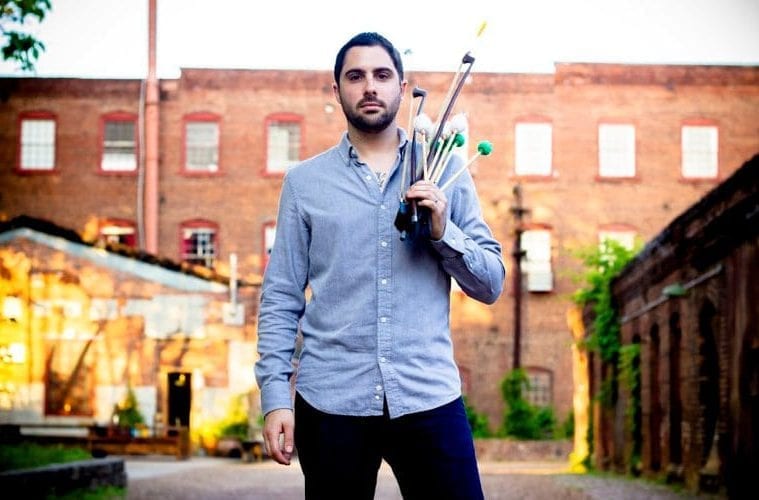 30 Under 30: Percussionist Victor Pons stretches the bounds of electronics and vibraphone At age 25, percussionist Victor Pons has emerged rapidly amid Atlanta’s growing new-edge music scene. The Goat Farm Arts Center describes him as being “amongst the radicals reshaping musical parameters” in Atlanta. Pons’ particular interest is in performing new works that involve vibraphone with live electronics, which he boldly demonstrated in a solo recital at the Goat Farm in May, drawing critical attention and establishing for himself a personal signature upon the public ear.

A former member of the McCormick Percussion Group, with which he can be heard on multiple recordings, Pons has performed in new-edge groups Chamber Cartel and the Clibber Jones Ensemble since arriving in Atlanta. Most significantly, he is also developing an advanced contact microphone system for vibraphone to exploit new possibilities for the instrument’s use in electro-acoustic music. ArtsATL recently sat down with Pons over coffee to discuss his origins, the musical journey that brought him to Atlanta and his vibraphone interface project.

ArtsATL: How did you get started with music?

Victor Pons: I’m kind of a rogue. Nobody else in my family plays music. It was by chance I started percussion. I grew up around Cocoa Beach in Florida. My middle-school music teacher, Laurie Broadway, put me in touch with a percussionist named Bobby Blum. In middle school, a drum set was the epitome of percussion, and everybody was a drummer. Bobby was the guy who got me interested in “percussion” more than “drums” [and] introduced me to marimba and vibraphone. I still love the drum set, but he opened the door for me.

ArtsATL: Growing up in Cocoa Beach, was your family connected to NASA?

Pons: My parents are engineers there. They were involved with the space shuttle program. That ties into where I am now.

Being conscious engineers, they wanted me to look into other things besides music. I really was not interested in anything else besides music in high school, but my parents convinced me to explore other options. One thing I excelled in was biology. So I did an internship at the [Kennedy] Space Center over the summer. It was really nice. We’d go out on the boat and tag sharks and sea turtles. So I thought maybe marine biology is the thing for me. Starting in 2006, I did three semesters in marine biology at the University of South Florida [in Tampa], and I hated every single moment with a passion. I was afraid to call my parents, because I was realizing this is not what I want to do.

ArtsATL: So what did you do?

Pons: I got in touch with a [percussion] professor there, Robert McCormick. I got lucky. He knew my private teacher, Bobby Blum, so he said, “I’ll give you a shot. I’ll give you one semester to prove yourself and we’ll take it from there.”

I called my parents and they were a little discouraged. They didn’t know if I was making the right choice. But the first semester of music was fantastic. I hadn’t played for a year and a half, so I really had to seriously play. It was a rough start, but I wanted it. It was above my head [and] hard for me to appreciate the full value of the experience I was getting at the time.

When I moved to Atlanta, I realized what I had there, that unique experience. I’m forever indebted to Bob [McCormick] teaching me how to listen to music, whether it is Bach, Beethoven, Takemitsu or Lou Harrison. I learned to appreciate a lot of things I would have been more closed-minded to otherwise. Looking back toward the end of my USF years, I really, really loved it.

ArtsATL: You’re on several recordings with the McCormick Percussion Group.

Pons: Thanks to Bob. His is probably the most recorded collegiate ensemble there is. It was fun to record, but now I realize how valuable that is to me, just having recordings. I’m on three, distributed by Naxos. There are more coming out still. One just came out six months ago.

ArtsATL: So what led you from the University of South Florida to Atlanta and Georgia State University?

Pons: Bob told me, “If you’re looking at schools in the Southeast, you really need to think about going to see Stuart Gerber.” I did my junior and senior recitals back to back [and] finished at USF in May 2011. I started at GSU in August 2011 and finished my master’s degree this past May. So this is my third year in Atlanta. Bob was really great, [but] one thing he lacked was the technology side of things. Stuart Gerber is the opposite. Watching him play “Komet,” “Kontakte” and “Zyklus” and all these other [Karlheinz] Stockhausen pieces — they had no electronics, but seeing him do this other side of things really opened my eyes and ears. Mentally, I was ready at that time to think about the electronics. I was always interested, especially with my parents as engineers, watching them, and growing up around electronics.

ArtsATL: At the same time, you were diving into Atlanta’s percussion community.

Pons: I didn’t know anybody when I moved here. Actually, I was fortunate to meet a lot of great people at one big event: Bent Frequency’s performance of “The Innocents” at the Goat Farm, with Allen Otte and John Lane.

It was my first time at the Goat Farm, and I was there to schlep gear. That’s when I first met Isaac Anderson and Olivia Kieffer, who were helping. We all went to Six Feet Under afterward, started talking and realized that we had similar interests in music and that they were former students of Stuart. I met Caleb Herron there, too. John Luther Adams’ “Inuksuit” at the Goat Farm was the first gig I played with Caleb and Chamber Cartel. As far as helping out Olivia, I played the first part of a season with Clibber Jones Ensemble.

I go over to Isaac’s place and we talk. We nerd out all the time over building things. Isaac is a full genius; the stuff he comes up with is so awesome. We relate really well and share ideas. The ideas just flow. This idea I have for the vibraphone all started on the porch at his place, from porch conversations, because I was talking about how I was really interested in the vibraphone.

ArtsATL: Your solo concert at the Goat Farm last May was based on being really engaged with the notion of vibraphone with electronics. Tell us about that.

Pons: I wanted to prove to myself that I could do a whole recital of vibraphone and electronics. I was curious how people would respond, but also I wanted to say, “I can do this.” It was this crazy idea. I did it solo, by myself, not with someone else triggering the electronics. I set the bar high [to] really immerse myself and figure this out. I learn best when I have to go 100 percent. Sometimes it doesn’t work out awesomely for me, but I figure out how to do it. An all-or-nothing kind of thing.

ArtsATL: How have your experiences in Atlanta been different from Tampa?

Pons: Almost all of the new music was at the university or the recording studio there. There was always that [tie] to the collegiate environment. Atlanta has all these great things going on and great spaces. I can play the stuff I want, work with like-minded people and maybe get this music out to people who wouldn’t [otherwise hear it].

Here in Atlanta, there are regular people with non-musical jobs who are coming out to listen to new, contemporary music. That performance of “Inuksuit” solidified the idea that this is a great place for me to work and how fortunate I am to have ended up here. Things are happening. This is a great town. Pons performs at the Goat Farm. (Photo by Mark Gresham)

ArtsATL: What about your own experiences growing up surrounded by electronics and engineering?

Pons: It interested me, but I never saw the connection with what I wanted to do until more recently. When I first started thinking about this vibraphone project, I decided to ring up my parents and I told them. They were like, “We could totally help you with that.”

I started playing around with buying piezoelectric discs to make the contact microphones, and [my stepfather] started doing a lot of research on his own as well. Before I could even meet up with him, he got a metal lid to a cooking pot, put one of the contact mikes I had made on it, and hit it with a wooden spoon to get oscilloscope readings. He was having a blast.

ArtsATL: This is cool because it allowed you to reconnect your music with your family, where originally there were real doubts about your getting into music.

Pons: Yes, this has given them a connection to [my] music. My parents are very excited that I’m coming back to that side of things. But even my mom has a hard time with new music sometimes. My parents are both Cuban. In Cuban culture, music is essential and is always tied to dance. With “art music,” it’s different. It doesn’t have to be tied to anything. I’ve been able to open her ears a little bit, and they’re helping to open my eyes a little more to the engineering side of things.

ArtsATL: Tell us about your vibraphone interface system.

Pons: It’s a contact microphone interface that reads data from each individual key on the instrument and relays data to a computer. The great thing is that it’s super-portable, something I can put in a suitcase. It will fit any vibraphone, so I can show up, open it up and attach it. I won’t have to take my [own] vibraphone everywhere. I don’t want to change the character, I just want to add more to it and get composers interested in vibraphone and electronics [and] write some pieces using this.

I think our job as musicians is to present things that are valuable whether they seem valuable now or not — something new that at least expands the repertoire or the capabilities of the instrument. I feel like I’m really going to contribute something that is unique and valuable to the community.

Basically, it’s time to build. I hope that by this coming spring, I’ll be able to debut a rough kind of prototype that will do everything I want it to do.