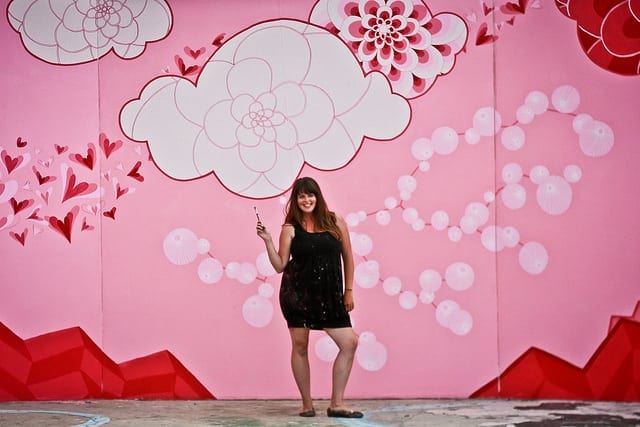 If you’re feeling a little low, you might consider sitting down with the exuberant Molly Rose Freeman for an instant mood fix.

Charismatic, sharp-witted and wildly ambitious, the 26-year-old new Atlantan has already proven herself a prolific muralist. She has completed more than 25 wall paintings, using her distinctive biomorphic imagery, in such places as Atlanta, San Francisco, Albany, N.Y., and Mexico since she unexpectedly took up that medium just two years ago. 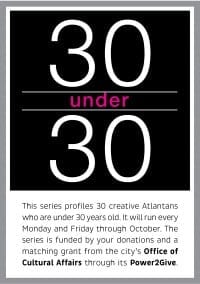 Eager for new experiences, Freeman went to Miami in 2011 to assist some muralists. By the time she left two weeks later, the artist, who had begun to feel hemmed in by her studio work, had become a muralist herself.

Starting a new career with six pieces in Miami’s Wynwood District, one of the epicenters of the genre — during the international art fair Art Basel Miami Beach, no less — was a feat. “Like learning to ski at the Olympics,” Freeman says.

While there, she met Monica Campana of Atlanta, executive director of Living Walls, who invited her to paint a mural in Atlanta the next year. While working on the mammoth MARTA underpass at Oakdale Road and DeKalb Avenue, Freeman fell in love with the can-do attitude of Atlanta’s arts community. Shortly thereafter, she relocated from Asheville, N.C., to Reynoldstown, and she’s become so much a part of the community that you’d think she’s lived here for years.

The North Carolina native attributes her go-getter instincts to her mother, an ardent history professor who specializes in the 20th-century political history of Southern women. Freeman comes from a long lineage of thunderbolt women, including, she recently discovered, the outlaw Belle Star. “I guess it’s in my blood to shoot straight,” she laughingly confesses.

While Freeman’s mother served as a strong female role model, it was her father who cultivated her artistic pursuits, encouraging her to tap her raw talent instead of pursuing a more applied-arts direction. Her father, a musician who once played with hippie bands such as the Passing Clouds and the Honkytonk Angels, was the first to impress upon her that to be a painter is among the noblest of careers.

After finishing high school at the North Carolina School of the Arts, a magnet school in Winston-Salem, Freeman turned her attention to creative nonfiction, earning a B.A. in writing at the University of North Carolina at Asheville. In the end, though, despite her talent for language and love of personal narrative — her senior thesis was on the oral histories of the women in her family — she decided she would rather make visual art, which she had continued to do during college, and art with more universal themes. 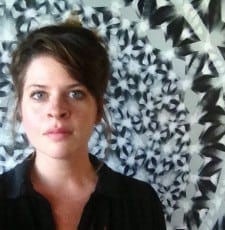 Cy Twombly was an early influence, but she found the universality that she was looking for in the traditional ornamentation of cathedrals, temples and mosques — sacred spaces “devoted to uplifting the human spirit through a common visual language: pattern, geometry, harmonious proportion,” Freeman says.

She also appreciated the way geometric patterning psychically energizes through its repetitive visual movement. “Your eye bounces around in all these regular patterns, so you get this movement but with solid rhythm, too, so it’s comforting but also engaging,” she says.

Freeman appropriated Celtic knots, traditional Greek designs and Japanese patterned fabrics to form her own wonderfully intricate and obsessive abstract drawings. Likening her process to biological growth and evolution, she says her designs grow out of themselves the way forms in nature develop, often in quirky, unpredictable ways. She rarely planned her studio work and has become more spontaneous in the execution of the murals.

She is unconcerned about the impermanence of her public artwork. She finds meaning and pleasure, she says, in the experience of the making: the people she meets, the energetic buzz of collaboration, epiphanies made as the work spontaneously develops. These unexpected connections are what keep her painting.

When Freeman was working on the Oakdale-DeKalb Avenue underpass, for example, she learned that the intersection of Whitefoord and DeKalb avenues, a battle line between Union and Confederate soldiers during the Civil War, had become the racial boundary between the Kirkwood and Candler Park neighborhoods.

“When I was thinking about what I wanted to paint, I thought about the elements of the body — organs and protein chains and blood vessels — that are the same in every human,” she explains. “The mural for me became a sort of portrait of the interior of the human body, as a way to explore the commonality between people who’d been separated by a political-social-racial boundary.”

The wall was nearing completion when Freeman heard U.S. Poet Laureate Natasha Trethewey speak at the 2012 Decatur Book Festival. Trethewey made the point that all races share the color of blood. In her poem “Miracle of the Black Leg,” she describes blood as “the soul’s bright anchor.” That phrase became the mural’s title.

A new resident artist for the Creatives Project, Freeman will soon be moving her studio to the Goat Farm Arts Center and volunteering at One Love Generation, where she’ll teach studio courses to teenagers. And she is scheduled to paint several more walls in Wynwood during Art Basel Miami Beach this year.

You can check out three of Freeman’s Atlanta murals in progress at Wylie and Powell streets in Cabbagetown (for Cabbagetown Wallkeepers), at Walker and Haynes streets in Castleberry Hill (for Forward Warrior), and at West Peachtree and 15th streets in the Promenade Building (for Core Reaction).