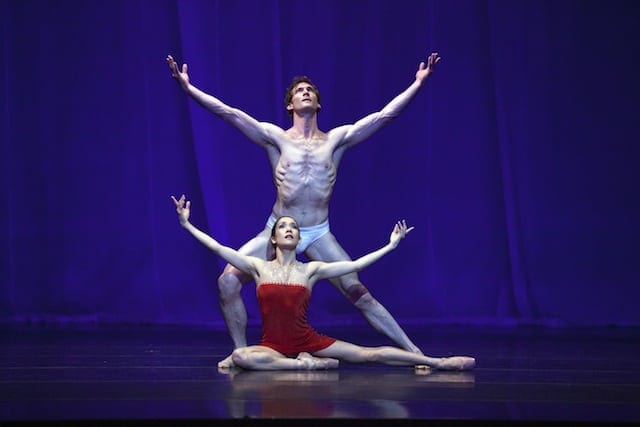 “I want to do awesome, fierce female work,” declares Rachel Van Buskirk. “I want to move as big as any guy. I want to eat up the space.”

Those who have watched her dance and grow with Atlanta Ballet know that Van Buskirk has fulfilled that mission. Strong, feisty and dynamic, she is one of the dancers who have enabled the company to transform itself from a regional ensemble performing “Cinderella” and “Swan Lake” to a hotbed of cutting-edge contemporary work that challenges audiences and dancers alike.

“With jumps that lick upward like flames and descend like feathers, Van Buskirk … is poised to burst into the limelight,” wrote ArtsATL dance critic Cynthia Bond Perry in the January 2012 issue of Dance Magazine. Van Buskirk also graced the cover of that issue and was named one of the magazine’s “25 to Watch.” In the 18 months since, she has seized the moment and become the dancer you notice in every ballet; she inhabits each role, however different, like a second skin.

“Rachel has really interesting instincts,” says John McFall, Atlanta Ballet’s artistic director. “She has a natural quality. I don’t think she has to work hard at realizing a role. She seems to find it and discover it. It’s been fascinating to watch.”

Van Buskirk, 27, spent the first three years of her life in the remote mountain town of Revelstoke, British Columbia, population 7,700. Her Japanese grandfather was a fisherman; her parents worked for the Canadian Pacific Railway. She envisioned a bigger world: she wanted to dance like the ballerinas she saw on television one evening when she was just three years old.

When the family moved to Vancouver in 1988, her mother signed her up for ballet lessons with Josephine Slater, who Van Buskirk remembers lived and taught in a giant house “with cats everywhere” and chain-smoked during class. “They used to drive me to ballet classes,” she recalls. “Mom sewed my costumes. Dad was a stage manager at some of the shows. They were in it with me.”

She auditioned for “The Nutcracker” when she was seven and was turned away because she was too young. She went back the next year and was cast as a baby mouse, a party girl, a reindeer and one of Mother Ginger’s children. Two years later, she was cast as Clara — the dream role for every child ballerina. “I was so into it, it was ridiculous,” Van Buskirk recalls with a smile. “I would forget that the cannon was coming up behind me. It would go off and I would shriek onstage.”

Her body, she says, was not designed for ballet. As she describes it, “I have stocky, bow legs, I didn’t have arches, my neck is short; there are many things about me that don’t make that perfect line.” Her second ballet teacher, Li Yaming, gave her the tools to understand her body and work with it intelligently. “He taught me to know what works for me and what doesn’t. With the body I was given, that’s what I needed to hear,” says Van Buskirk, who, like Li, is shorter than most dancers.

She was soon dancing four to six hours a day and performing with the Royal City Youth Ballet Company in such full-length works as “Coppelia.” But she still found time to be a teenager. She had a high school sweetheart, went to her high school prom and had friends who were equally driven, each in their own fashion. Her prom date, Cole Schmidt, is now a successful jazz musician. In April his band, the Pugs and Crows, won a Juno Award, Canada’s equivalent of a Grammy, for Instrumental Album of the Year. 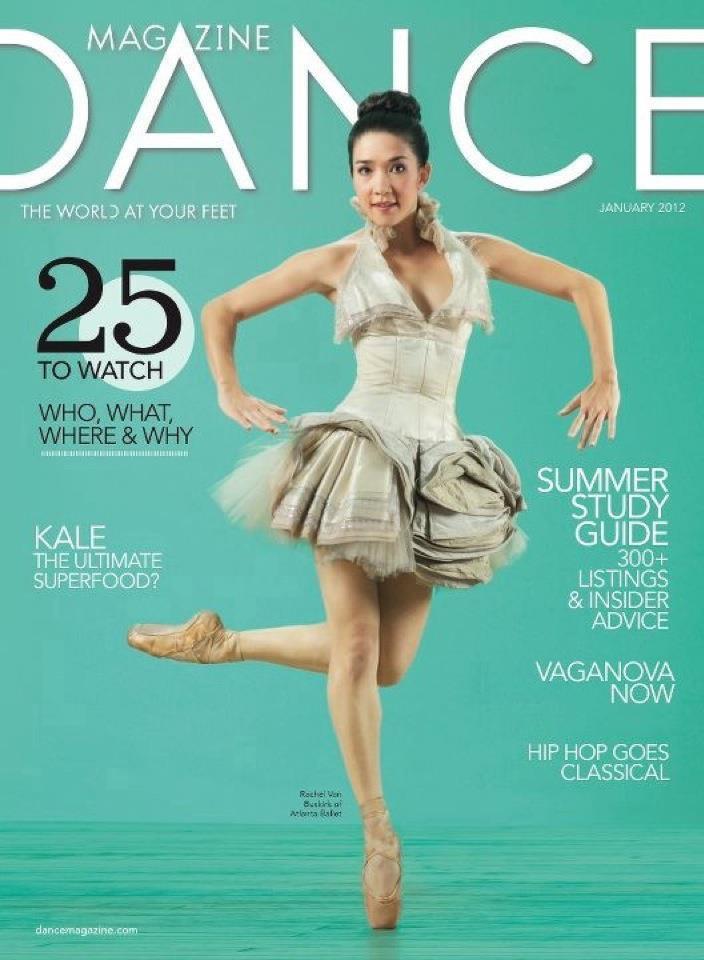 She has fond memories of growing up. “My mom and my sister and I would lie in bed and watch the six-hour ‘Pride and Prejudice’ on TV,” she recalls. Her family also encouraged her to read. Jane Eyre is still her favorite book, but when she and I met recently at the Dancing Goats coffee shop, she was on the last few pages of a dog-eared copy of A Game of Thrones. “I am a huge fan of fantasy,” she explains.

When she was 15, Van Buskirk was one of several promising young dancers chosen by her teacher, Li, to attend Atlanta Ballet’s well-regarded summer program. Summer intensives at professional companies are often a dancer’s first step toward a career in ballet, and that was true for Van Buskirk.

The company offered her scholarships and asked her back every year until she finished high school, and then she moved to Georgia to be an Atlanta Ballet trainee. She settled in quickly; the core of friends she made in the summer programs gave her a strong foundation to start her new life. But she was aghast that they thought Georgia has mountains. “These are glorified hills,” she told them on her first road trip northward.

The first ballet she did here was “Dracula,” in dancing ensemble parts. In 2004 she was offered a fellowship and danced in so many ballets that she already felt like a full member of the company. Her first major role was in the 2007 production of “Sleeping Beauty,” where she danced three solos.

That was the moment when McFall saw what he had in his Canadian ballerina: a highly intelligent dancer who “knows that dance is a lot more than the steps. She has that natural gift. When she did the three fairies in ‘Sleeping Beauty,’ she made each one really unique. It was a pleasure to watch.”

After McFall asked her to join for real in the 2007-08 season, he cast her in numerous ballets, including “Swan Lake” and “Moulin Rouge: The Ballet.” In 2010 she danced in the U.S. premiere of James Kudelka’s stunning “The Four Seasons,” a favorite work of hers, in part because Kudelka is a fellow Canadian much loved north of the border.

These days, McFall says, Van Buskirk is “exceptional in the art of partnering. Everyone thinks the guy does everything. He does an awful lot. But the female dancer has to know how to present her shape and timing in a lift. She is at the pinnacle of dancers who understand that.”

She had ample opportunity to demonstrate that skill during the 2012-13 season, her breakout year with the company. She excelled in “The Nutcracker” as the Sugar Plum Fairy, performing the role twice as often when a fellow dancer was injured, and she was featured in Helen Pickett’s abstract “Prayer of Touch,” Ohad Naharin’s “Minus 16″ and Annabelle Lopez Ochoa’s “Requiem for a Rose.” In the March program, “New Choreographic Voices,” Van Buskirk danced in all four ballets, whipping through their unique technical demands with ease. Her wonderfully nuanced performance as Lucy in Michael Pink’s “Dracula” was a tour de force where the challenging choreography became the vehicle for her to show us the character, eloquently drawn in emotional light and shade.

In “Prayer of Touch,” she flew through the work’s fast, technically complex twists and turns. Then she astonished us with one poignant moment in which she held the hand of her partner, her back to the audience, and walked away in a tender goodbye, unnoticed by the restless crowd around them. It’s a detail many dancers would have missed.

Her biggest leap into the limelight came with David Bintley’s “Carmina Burana,” danced to a live performance of the Carl Orff score, with her parents in the audience. Bintley cast her as Fortuna, a strong female role despite the costume: high heels and a blindfold. Her striking solo opened the ballet.

“’Carmina’ was the most unexpected dream,” Van Buskirk says. “It was one of the most exciting moments for me, being alone onstage, with the fog and that awesome music.”

She lives in Cabbagetown with her boyfriend, Kyle Hight, a trained sommelier and chef. She enjoys “the cool new indie thing” of do-it-yourself homemaking such as baking bread and doing embroidery. “Feminist power was very anti-domesticity, but now these skills are coming back,” she says. “Either you feel empowered by it or you don’t, but I like it. You can have a career and make a home be beautiful.”

Ballet dancers have a reputation for eating poorly and smoking to stay thin, but Van Buskirk and her fellow dancers eat chia seeds and drink juices. “We are very aware of healthy foods to supplement what we do,” she says. “It’s very strong in this company.” That may be why the next book on  her reading list is Silent Spring, Rachel Carson’s groundbreaking volume about the hazards of the pesticide DDT.

She has another 10 years, maybe less, as a dancer. She likes the idea of a second career in book publishing, but whatever she does next, she wants it to be “something I can pursue with as much passion as dance.” She plans to take advantage of Atlanta Ballet’s partnership with Kennesaw State University, which allows company members to schedule academic classes around the demands of professional ballet.

In the meantime, she continues to refine her art. She describes herself as a “physical sponge,” absorbing new styles and techniques from the world-renowned guest choreographers whose works are reshaping Atlanta Ballet. Increasingly, those choreographers are picking Van Buskirk to be the first cast in their ballets, no doubt because they see what her audiences are now seeing: a sparkling, versatile and highly intelligent dancer who can be an eloquent storyteller one moment, deeply poetic the next, and just plain riveting to watch. She loves to perform, and it shows in every step. Atlanta Ballet’s metamorphosis would not be possible without dancers like Rachel Van Buskirk. It is lucky to have her. So are we.

Van Buskirk will dance with Wabi Sabi, the contemporary chamber troupe of Atlanta Ballet, at the Atlanta Botanical Garden on August 15 and 22. Wabi Sabi will also perform August 17 at the Sautee Nacoochee Center.