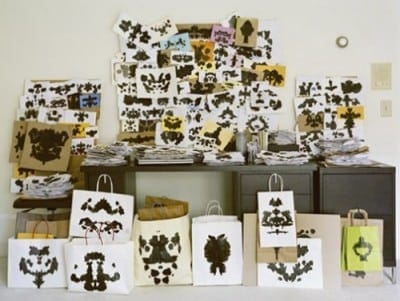 Sigmund Freud, the father of psychoanalysis, collected art. Surely he would smile upon Sarah Hobbs’ photographs, inventive embodiments of the psychic states that he dealt with on the couch.

The photos in “Emotional Management,” her show at Solomon Projects, focus on the ways we deal with negative feelings. As in the past, she turns the rooms of her home into stage sets that suggest theater of the absurd by way of “House Beautiful. ”

“Catharsis” presents the aftermath of a plate-smashing outburst as if it had been staged by an interior decorator, with the shards placed just so and the picture on the wall artfully askew. (For some reason, this photograph makes me think of the unreal realism of Sandy Skoglund’s tableaux.)

The domesticity and comfort of the setting accentuate the discomfort that leads to the behavior she depicts — the bathroom mirror papered over with butterflies in “Denial,” or the curtain of interconnected paper clips draping a desk covered with files in “Procrastination.”

Hobbs dispenses with humor in a couple of these photographs. She also gets a little closer to raw emotion. “Purging,” which I discuss in my AJC review, crosses the line between human nature and neurosis. “Avoidance,” in which the windows surrounding the front door are covered in aluminum foil, is bare and bleak.

Still, her version of raw is still blessedly restrained, especially in the context of the confessional mode that dominates popular culture — think Woody Allen or television talk shows. Although none of the works in this show replace the iconic photos “Memory Loss”(2000) and “Perfectionist” (2002) on my favorites list, “Emotional Management” is still full of “aha” visual and psychological moments.