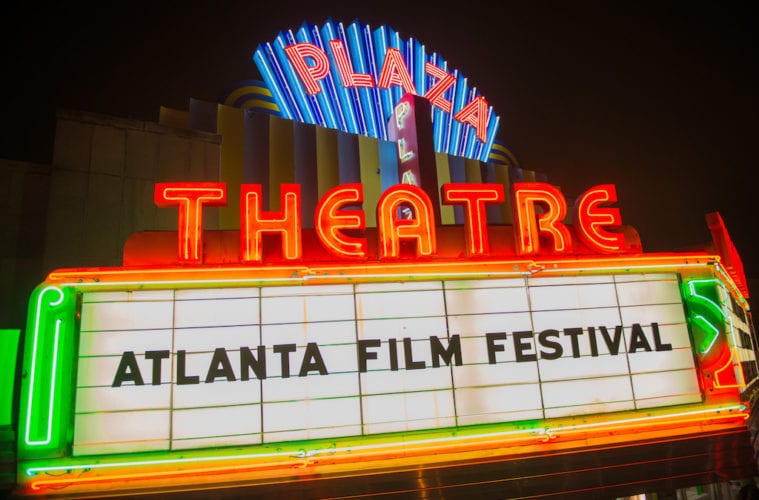 The 2019 Atlanta Film Festival kicks off April 4 and runs through April 14 with over 180 screenings at venues all across the city. (Photo courtesy of the Atlanta Film Society)

Here’s what you need to know to gear up for this year’s festivities.

1. The festival opens on April 4 and runs through April 14 with screening locations all around the city, including the Highland Ballroom, Hilan Theatre, Dad’s Garage, 7 Stages, Plaza Theatre and more.

2. It kicks off with a preview party at the Plaza Theatre on March 22 at 7 p.m. The event will include screening trailers for 2019 official selections, and is free and open to the public.

3. The festival opens with a screening of The Farewell. Starring Crazy Rich Asians’ Awkwafina, The Farewell is about a “a Chinese family who decides to spare their grandmother the facts of her terminal diagnosis and instead plan an impromptu wedding as a way to gather and say their goodbyes.”

4. The festival closes with the film Them That Follow, about a misunderstood Appalachian community that goes to unconventional lengths to prove themselves to God. The film stars Academy Award winner Olivia Colman (The Favourite) and Georgia native Walton Goggins.

5. This year’s festival boasts over 180 feature-length films, film shorts, documentaries, music videos and more. At least 20 percent of these were made, produced or created in Georgia.

7. After a 10-year hiatus, this year’s festival will see the return of the Image Awards, presented at the Fox Theatre on April 3. The Image Awards recognizes leaders and change-makers who are making big contributions to Georgia’s film industry and community.

8. One of the most anticipated films of the festival is the Netflix Ted Bundy biopic feature EXTREMELY WICKED, SHOCKINGLY EVIL, AND VILE, directed by Academy Award-nominated director Joe Berlinger. Berlinger is slated to attend the festival on April 7 and will receive the ATLFF Originator Award prior to the screening of the film.

9. This year’s festival will feature a full block of locally made short films. Billed as a “medley of Georgia makers and minds,” It’s a Beautiful Day in the Neighborhood features nine short films with subjects as varied and diverse as their directors.

10. Fans of film are invited to volunteer at this year’s festival, for positions such as theater attendants, ushers, workshop attendants, box office and registration agents and greeters. ATLFF volunteer perks include screening vouchers and a volunteer incentive program.

For more information, including parking info and a complete list of venues and events, visit https://www.atlantafilmfestival.com/.